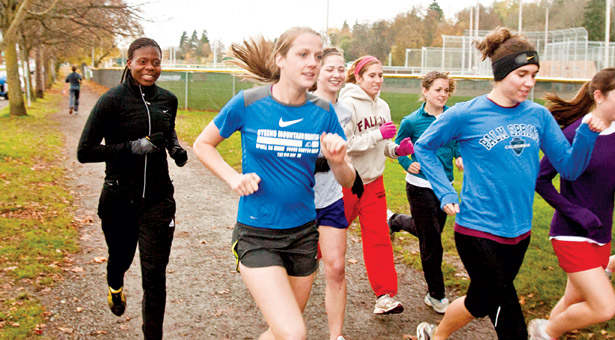 Assistant Track and Field Coach Letiwe Patton (left) does many of her own workouts in practice alongside Falcon runners.

The sobs broke loose, but Kayla Wilkins continued to run. She was soaked in water and smudged with dirt. Red turf marred her white Seattle Pacific University jersey. “Go Kayla!” she heard her teammates shout, and she kept running.

She approached a hurdle and jumped. Her legs ached and were covered with scrapes from falling on the track after her first water jump. The water pit loomed in front of her. She leaped off the bar and stumbled into the water again. Everything in Wilkins wanted to quit. “Why am I even doing this?” she thought.

But she kept hearing those cheers, and the encouragements of Assistant Track and Field Coach Letiwe Patton. That’s what got her through her first steeplechase in Spring 2010. “Letiwe knows what it’s like,” says Wilkins, an SPU senior. “Most people would have quit after that first race, but having Letiwe there telling me it gets better helped.”

The 3,000-meter steeplechase is seven-and-a-half laps, 28 hurdles, and seven water jumps. Patton’s first steeplechase at the University of Idaho in 2002 looked a little bit like Wilkins’ first.

“It was brutal,” Patton says. “I was in the water at almost every lap.” But she went on to break records in the 3,000 steeplechase for the University of Idaho, the Big West Conference, and her native Zimbabwe. She still holds all three records today.

Head Cross Country Coach Erika Daligcon says that Patton and other SPU coaches motivate athletes with their own stories. “Her stories are almost matter-of-fact, but they’re amazing when you stop to think about it. She’s walking proof of what hard work can do.”

Patton started running in herhometown of Dorowa, Zimbabwe, in fourth grade. At 15, she joined a local running club six miles from her house. To get there, she ran along the busy main highway, sometimes with shoes and sometimes without — making the workouts about 17 or 18 miles total.

The national and regional races were up to three hours away from Dorowa. Her mom, who has nine other children, would scrape together enough for her to ride a truck, a train, and/or a bus to the event. But the cost was worth it.

“I was always winning. I was undefeated,” Patton says.

As the top junior runner in Zimbabwe for three years in a row, she traveled to international events, such as the world cross country championships in Budapest, Hungary. She came to the United States through a scholarship program for athletes aiming at the 2000 Olympics, but she didn’t qualify.

“I decided to stay and go to college, because I knew that I couldn’t go to college if I went home,” she says. After a successful track and cross country career at the University of Idaho, she started assisting the Seattle Pacific University team in 2009.

Patton hopes to resurrect her Olympic dream by running for Zimbabwe in 2012. She needs to record a qualifying time of 9 minutes, 48 seconds by July 12, 2012. The time is only five seconds less than her Zimbabwe record. “I think I can do it,” Patton says, despite a few setbacks. She was hoping to qualify in 2011, but was halted by an injury to her knee and a bulging disc in her back. In the spring, she came back to training full-force, with intense morning sprints and weightlifting later in the day.

And Patton’s not the only potential Olympic contender on the Seattle Pacific coaching staff. Carly Dockendorf, another SPU assistant track coach, also spends several hours a day training for the Olympics. She finished last season ranked No. 1 in the pole vault for Canada and broke the Canadian indoor record by clearing 4.42 meters.

“Working with athletes at SPU helps me to be a better pole vaulter,” Dockendorf says. “I see the athletes make similar mistakes that I make, and it reinforces the things that I need to fix.”

Dockendorf says that she and Patton can both be role models for the younger athletes. “We both have our minds set on the same thing, and we’re both going after our life dreams.”