Fifth Graders Go to College for a Day 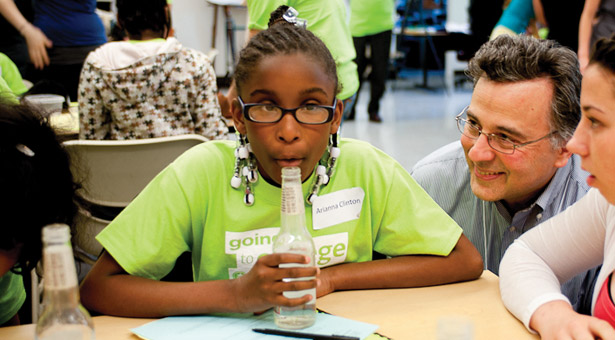 SPU students from the School of Education accompanied Dearborn Park Elementary fifth graders to a music lesson, to a science lesson.

Fifth graders from Dearborn Park Elementary in South Seattle sat at tables in Seattle Pacific University’s Science Building ready to perform scientific research. First task: Strike a tuning fork against a rubber bumper, and describe the sound. What did they hear?

“I hear like sparkle,” wrote one student on her worksheet.

“A shock of awe,” wrote another.

“It sounds like you have to change your brakes,” wrote a third.

During the annual “Going to College in the Fifth Grade” day, 63 city kids stretched their brains on the University’s campus. Now in its seventh year, the program, organized by SPU’s School of Education, includes science, music, and PE lessons, a library scavenger hunt, and lunch in Gwinn Commons.

This year’s group also heard a presentation about how “College Is a Plan, Not a Dream” including a talk from Christine Palpallatoc, a graduate of Dearborn Park and Garfield High School who begins her studies at Seattle Pacific this autumn.

“This is my best day,” said Angela Sheffey-Bogan, principal of Dearborn Park. “The students get to see and experience college with their peers and teachers, even if they don’t have siblings or parents who have gone to college.”

After leading the fifth graders in a rousing rendition of “Every Time I Feel the Spirit,” Associate Professor of Music Stephen Newby asked them, “Who wants to be in my class seven or eight years from now?”