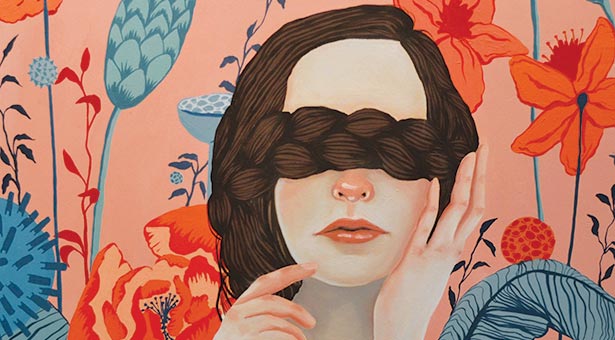 Listening to an episode of the National Public Radio show Radio-lab about the chemicals released in our brains when we’re in love got Seattle Pacific University senior Christa Pierce thinking. Was there a way she could visually represent those chemicals — and the lack thereof?

For her portion of the Senior Art Exhibition, an Inaugural Year Academic Showcase event, she created six paintings, three representing the effect of neurotransmitters oxytocin, dopamine, norepinephrine, and three representing their absence. The “lack of dopamine” piece depicts “a figure surrounded by beautiful things, but she can’t see those things,” Pierce says.

By painting a human figure in front of a flat, decorative background, Pierce juxtaposes two visual styles: one from the tradition of realistic painting, and one inspired by the decorative arts — perhaps textiles or wallpaper. By putting those styles together, the painting creates a new world that is representational but not quite real.

“I didn’t want to let go of tradition,” she says, “so I paired it with something modern. I think that’s exciting.”