Feed your need for sports news between issues of Response. Visit spufalcons.com for up-to-date news, stats, photos, and video. And follow @SPUSports on Twitter. 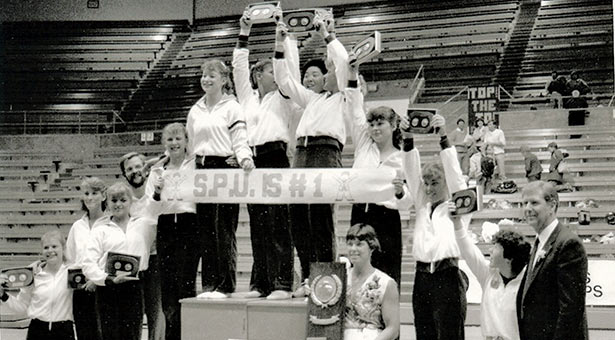 A storied program lives down a dark hallway beyond the brick façade of Royal Brougham Pavilion. An inscription above the doorway to the Gymnastics Center, to the left of the gymnasium — “pursue perfection today” — gives way to maroon banners extending the height of the far wall that list SPU’s 175 All-Americans.

Head coach Laurel Anderson Tindall ’75, whose name appears several times near the top, stands underneath and scrutinizes her athletes.

Tindall transferred from University of Washington to compete at SPU as a junior in the transition from club to intercollegiate competition.

SPU Athletics officials saw potential for a winning gymnastics program at a small school and received interest from a couple of high-profile recruits. Tindall and Debbie Halle Jackson ’75 earned 13 All-American awards between them in the program’s first two years. Tindall won the national vault title as a senior.

Immediately after graduation, she took over as coach. She has overseen 20 consecutive top-four finishes, including national titles in 1986, 1992, and 1997. SPU qualified as a team for 30 of the last 31 national championships, missing out by one spot in 2009.

“She is able to come up with skills and combinations to get the highest value out of any athlete,” says Deni Boswell Maxwell ’98, a member of the 1997 championship squad. “She just knows her gymnastics.”

Forty seasons after the program’s inception, the current crop of Falcons is hard at work, trying to join the list of All-Americans.

Noise bounces from floor to vaulted ceiling with exposed rafters plastered in drywall. A boom box blasts radio tunes in the middle of the room, but the athletes’ shouts of encouragement for their teammates drown it out. 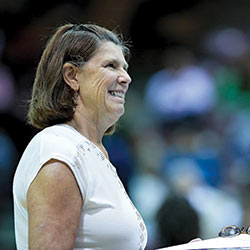 Gymnasts barely exhibit the soreness of a long season, although knee braces and ankle tape abound. Despite the daily toll that three hours of tumbling takes on the body, smiles and laughter flow easily.

“Kids grow up wanting to do college gymnastics,” Tindall says, “because gearing up for the Olympic team is not realistic anymore at ages 18 to 22.”

In her 40 years as a Falcon, Tindall has learned that the sport’s allure extends beyond the judge’s scorecard. “I think they really see that once they’re in this team, they’re part of a family forever,” she says.

The team spirit shows up around campus. Sometimes gymnasts can be seen during chapel services, wearing team gear and taking up two rows of pews. They also bond while receiving medical treatment together or studying on cross-country flights.

At the end of practice, most athletes meander to the training room downstairs. A group of four gymnasts surround the ice chest as athletic trainers pack sore areas with ice bags. Another five submerge their extremities in a 50-degree whirlpool, each sticking in a foot or leg.

Team goals take precedence over individual awards, inside and outside the gym. “In club gymnastics, it’s all about the individual,” senior Corrine Wise says, “but as soon as you get to college, it’s a more team atmosphere.” Wise placed fourth at nationals on the balance beam this spring.

Winning is among Tindall’s priorities, but as a coach with three championships and four National Coach of the Year honors, Tindall’s main concern is to “graduate quality women.” The Falcons boasted a team grade-point average of 3.38 in 2012.

“She sees the life lessons in every situation,” Maxwell says.

The way Tindall puts it: “There are other things just as important as winning.”