The SPU Music Department gives students opportunities to cultivate their passion for music as it equips them to change the world. 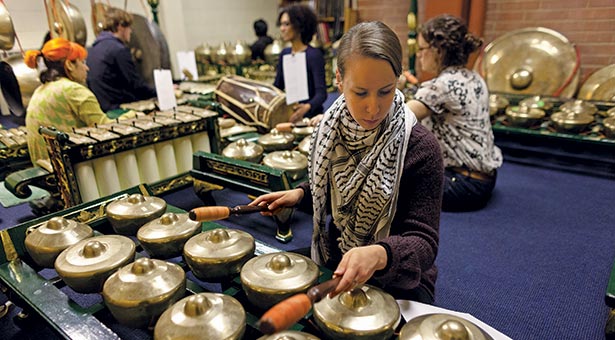 The Gamelan ensemble is a collaborative ethnomusicology class with University of Washington, so UW student Emma Lux (foreground) plays along with SPU instructor of music Christina Sunardi (left) and SPU student Julie Flint.

Four sets of shoes sit on the floor in a second-story hallway of the Crawford Music Building at Seattle Pacific University. The shoes belong to the stocking-footed students seated on the floor inside room 209. Surrounding the students, on almost every available floor space, are golden chimes, bell- like instruments, and gongs on green wooden stands, painted with golden dragons.

Instructor Christine Feagin ’08 cues up a recording, and the students follow along with sheet music showing numbers, dots, and small half-circles.

“Have you heard anything like that?” Feagin asks the students.

Welcome to SPU’s Indonesian Gamelan class. The gamelan is a collection of instruments that use very different tone arrangements than the violins or xylophones of traditional Western musical ensemble groups.

You may not recognize the names of the individual instruments: bonang, saron, gambang. But if you have attended a celebration in Seattle’s International District or seen The King and I, there’s a good chance you will recognize the sound of a gamelan performance, with its unfamiliar five- or seven- tone scale.

Seattle Pacific’s gamelan came by way of Surabaya, Indonesia, in 1997, explains Professor and Music Education Director Ramona Holmes, who curates the collection of instruments. Holmes took it in when the city was looking for a place to house the instruments after Surabaya gave it to the city of Seattle. “As an ethnomusicologist and music educator, I thought that having it in our school would offer students a chance to learn about another culture in a deep, rich way,” she says.

In the summer of 1997, SPU offered its first gamelan class.

Feagin arrived at SPU in 2004 as a piano performance major. An advertisement in the music building for the gamelan class caught her eye: “I had no idea what I was getting myself into.”

She was hooked. Feagin proceeded to take gamelan as an elective throughout her time at SPU. “It helped broaden me as a student,” she says. “It helped me expand my understanding of what music is.”

After graduating, Feagin joined Gamelan Pacifica for a time, performing and recording on the Asian instruments. When the usual gamelan instructor was unable to take the class this year, Feagin stepped in.

Most of her students have similar stories of how they ended up as gamelan musicians. “I had no idea what a gamelan was,” sophomore Amanda Sharp explains. “It’s completely opposite of anything I’ve ever done.”

Sharp, a music therapy student whose background is piano and alto saxophone, is now taking the class for the second time, eager to learn more challenging pieces, along with freshman Laura Boggs.

Boggs notes that she first signed up in part because “it sounded fun to hit things.” But like Sharp, she’s returned to learn more about Indonesian music, a far cry from her usual instruments of piano and guitar.

Feagin says one great thing about the gamelan class is how welcoming it is. While you need to study an instrument for years before you’ll be ready to play in most university ensembles, you can start playing with Seattle Pacific’s gamelan group on your very first day with one of the simpler instruments. “It’s very open — come in, play with us.”

Feagin isn’t saying that metaphorically, she means it, gesturing for a visitor to sit down. So the visitor does, and tries to follow along on a small saron (metallophone). And after a few rounds through a simple piece called “Ricik-Ricik,” the sound, different though it may be, comes together as music.