A Warm Beach State of Mind 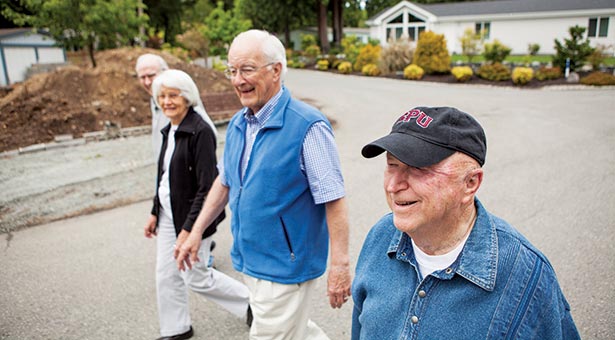 Last summer after Seattle Pacific Emeritus President Emeritus Curtis Martin ’55 completed his garage remodel, he threw a shindig. He invited 38 neighbors to a sit-down barbecue in the garage that featured a musical combo starring friends on guitar, fiddle, and a string and washtub affair called a “gut bucket.” The contented company ate their fill and sang folk and cowboy songs on into the night.

The shindig sprang from a common love for SPU that shines bright throughout Warm Beach Senior Community. The retirement complex, a ministry of the Free Methodist Church, is located an hour north of Seattle near Stanwood, Washington. It is home to 350 residents and a strong sub-community of SPU alumni, former staff members and administrators, former trustees, and emeriti faculty.

V.O. “Bud” McDole ’52 is former chair of the University’s Board of Trustees and now president of the Warm Beach Residents Council. He heads Operation Facelift, an effort to beautify the red cedar trees and planting areas of the 270-acre Warm Beach Senior Community. “I didn’t come here to die, but to live,” says Bud with a smile. “I am run ragged with places to go and people to see.” Including singing with the camp’s Beachwood Boys men’s chorus — “three dozen old frogs like me.”

It’s a fact, says senior community program coordinator Mike Tatham, that seniors as a statistical group like to live in proximity to a university such as Seattle Pacific for access to educational programs and shared mission focus. “For the last four years, we’ve hosted the annual SPU Emeriti Faculty Luncheon,” he says, “and whenever SPU makes presentations about innovative academic programs, we get great turnouts.”

Those special University occasions have been as diverse as a performance of the SPU String Quartet and a conversation with members of the women’s basketball team. Nursing students once demonstrated a mechanical training infant, and President Emeritus David McKenna spoke about his book, Retirement Is Not for Sissies.

Before his death late last year, Professor Emeritus of Physics Don Kerlee, while a resident of Warm Beach with his wife, Ivy Coxson Kerlee ’50, provided the community with a popular series of more than 20 talks on “Letters to My Grandchildren.” The writings to his 15 grandchildren explored what they could know about God and often incorporated fascinating tidbits from physics and astronomy.

“Life at Warm Beach creates a certain synergism,” says Curtis. “Those with SPU ties maintain the core, the stimulating atmosphere of the University. It’s good soil in which people can grow.”

Near his private residence is the Warm Beach Health Care Center where Carol Martin, Curtis’ wife of 61 years, receives continuing care for conditions resulting from a stroke in 2007. Curtis visits her several times a day and helps with her meals. Across the hall from Carol lives Evelyn Buckley ’46, at the age of 106 the oldest Warm Beach resident. On a recent visit, Curtis was hailed by Bob Schneider ’55, a Wycliffe missionary in Latin America for 62 years.

Soon to move near the Martins are Norm Edwards ’55 and Nancy Snelling Edwards ’64, who like being just close enough to Seattle to take in a few Falcon basketball games and enjoy their Seattle Symphony season tickets.

“There is so much SPU history connected with our friends at Warm Beach,’ says Norm, former alumni director at Seattle Pacific. “Some residents are descendants of the earliest leaders and students of the school. It makes it easy to grow together in worship, ministry, and play.”

Some retirees move to a part of Warm Beach where the burden of home upkeep is left to senior community staff members. Frances Barbezat Reynolds ’49 and her husband of 63 years, Jim Reynolds ’50, MEd ’64, moved there 12 days shy of Jim’s 80th birthday. He has been relieved of heavy yard maintenance, and she can volunteer at the bustling Warm Beach Thrift Store and annual Bazaar.

Alisa Sands oversees community relations for the senior community. She says it is small wonder that veterans of Seattle Pacific, some of whom have been friends for 50 or 60 years, would find Warm Beach appealing: “The SPU folks are like-minded and have much in common, such as service to others, Christian faith, and, of course, the University itself.”

For Bud, there’s one other key element: “We’re having fun up here. It’s contagious!”