Memoir Explores an Arctic Wilderness of Grief and Faith 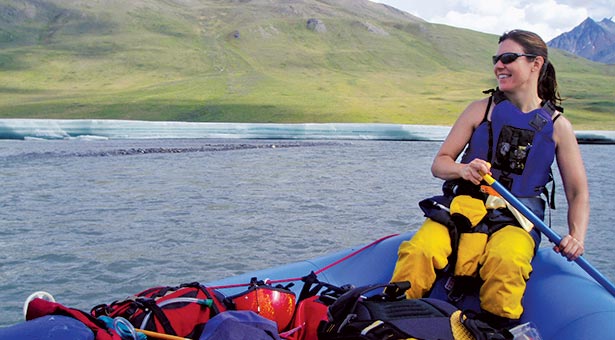 Since her first trip to the Arctic National Wildlife Refuge, Shannon Huffman Polson MFA ’12 has returned several times and developed an interest in preserving the fragile landscape.

One year after her parents were killed by a grizzly bear in the Alaskan wilderness, Shannon Huffman Polson MFA ’12 traveled to the Arctic National Wildlife Refuge to retrace their journey.

Among the equipment she carried: bear spray, firearms, a bear fence to protect her tent — and a journal.

Writing about the trip was a way to make sense of a horrific event. But she found she wanted to write more than a record of events. She wanted to craft an excellent narrative “so that something beautiful could come out of something difficult.”

This began what Polson calls “a journey of composition and a journey of faith” — that resulted in the publication of North of Hope (Zondervan, 2013), a memoir released this spring.

The book deftly weaves strands of her journey down the Hulahula River to the campsite where her parents were killed, together with memories of her family, and with memories of rehearsing and performing Mozart’s Requiem as a way to mourn their death. Braiding these stories together, she says, was a technique she learned from her course readings in Seattle Pacific University’s Master of Fine Arts in Creative Writing program. Writers such as Kathleen Norris, Barry Lopez, and Robert Clark inspired her.

Polson had completed a draft of the story of her Arctic journey before she enrolled, but put it aside to work on her class assignments, because the MFA program emphasizes creating new work.

“It was really helpful to take the time and focus on writing and be in a community of writers,” Polson says. “And it was freeing to be in a place that honored the possibility of writing about faith.” As she learned and experimented during her two MFA years, the manuscript evolved, too.

Fellow student David Jacobsen MFA ’11 heard Polson was looking for a publisher and asked to see her book proposal. Himself the author of a memoir, Rookie Dad, and editor of nearly 50 books, Jacobsen had just begun to expand his writing and editing business into work as a literary agent. Polson’s manuscript intrigued him.

“She had really crafted a readable, beautiful story,” he says. “And there was a depth beneath it.” They worked together to revise the book proposal, and eventually to sell the book to Zondervan — Jacobsen’s first deal as a literary agent. He hopes the book will live long in readers’ memories: “I can see this as a timeless piece about grief and hope.”

“Shannon’s writing invites people to join her on a journey with great honesty and integrity,” says Gregory Wolfe, writer in residence at SPU and director of the MFA program. “It becomes a joint expedition of reader and writer.”

Polson says she struggled most with writing the book’s ending: “You don’t wrap up grief.”

But through both the Arctic trip and writing about it she discovered that the process of mourning and lament were a necessary part of healing and learning to live in faith. She found herself taking comfort in the Episcopal liturgy and celebration of the Eucharist especially.

“You can’t have Easter without Good Friday,” she says.

And out of her journey came something quite unexpected — a love for the harsh Arctic landscape in which her parents lost their lives.

“It’s really one of the last great wilderness areas,” she says. “And it was a place that brought them great joy.”