and watch a video with Eric Metaxas 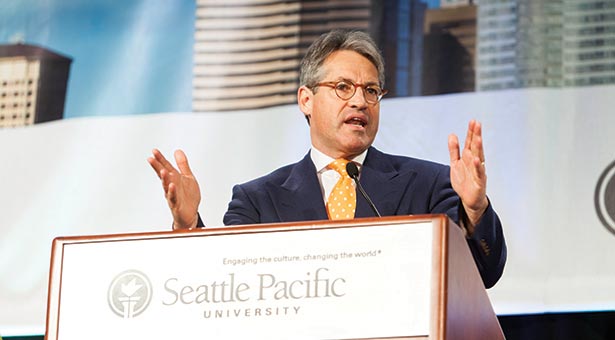 Eric Metaxas spoke about his book Bonhoeffer at SPU’s annual Downtown Business Breakfast on April 23, 2013. “Know what you believe,” he told listeners, “because it will matter.”

One of Seattle Pacific University’s most popular annual events, the Business Breakfast gave nearly 1,000 Northwest business leaders an opportunity to hear Metaxas explain how he came to write the biography of Dietrich Bonhoeffer, the German pastor who stood up against the Nazi regime, eventually joining a plot to assassinate Adolf Hitler. Bonhoeffer was arrested, and executed at the age of 39.

“The book seemed to strike a chord or two,” Metaxas said at the event. “There’s something about this story that speaks to people in a unique way.”

With an eclectic collection of writing to his name — from The New York Times to Veggie Tales — Metaxas saw his first biog- raphy, Amazing Grace: William Wilberforce and the Heroic Campaign to End Slavery, become the official companion book to the 2006 film Amazing Grace. As the 2012 National Prayer Breakfast speaker, he handed President Obama a copy of Bonhoeffer.

At SPU’s Business Breakfast, Metaxas recounted first learning about Bonhoeffer when he received Bonhoeffer’s classic The Cost of Discipleship in 1988, following his graduation from Yale University.

Having a mother who grew up in wartime Germany and a grandfather who’d been a “reluctant German soldier” killed in battle in 1944, Metaxas said he felt compelled to write this book.

The moral courage and sacrifice Bonhoeffer displayed makes him an example for Christians today, he told attendees.

“The story of Bonhoeffer really captured my imagination,” he said. “Have you glimpsed the kingdom of heaven or are you just floating along unsure of what you believe? Bonhoeffer spent his life exhorting people to think about these things, because there will come a time when it will matter.”

“Eric was a wonderful combination of a thought leader, a best-selling author, and an entertaining speaker,” says SPU Provost Jeff Van Duzer. “He was passionate about Bonhoeffer and the lessons that Bonhoeffer’s life has for us today, and this passion animated his remarks from beginning to end.”