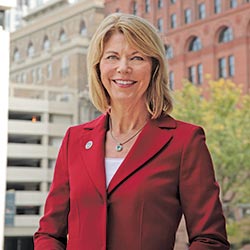 Jean Stothert ’81 has joined the ranks of America’s mayors — and made history.

Stothert, who took office June 10, 2013, is the newly elected mayor of Omaha, Nebraska, and the first woman ever to hold this position. A member of the Omaha City Council, and former 11-year member of Omaha’s Millard School Board, she received 57 percent of the votes in the general election to win over the three-year incumbent mayor. Stothert, a Republican, ran a large-scale grassroots campaign that tapped into support among social and fiscal conservatives.

“My effort during this campaign was just not to secure Republican votes. I’m going to be the mayor of all of Omaha,” she told the Omaha World-Herald.

Stothert earned a nursing degree from Seattle Pacific University and worked as a critical care nurse and nursing manager. As mayor, she wants to lower property tax rates and shrink city government.