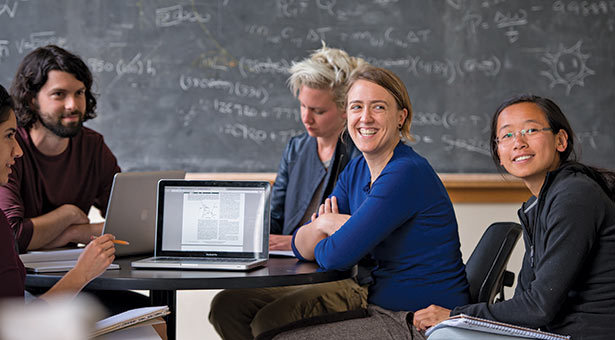 Angie Little ’05, second from right, with participants of the Compass Project at the University of California, Berkeley. More than 40 graduate students have worked on the project, not including its founders, since 2007.

When Angie Little ’05 was a physics major at Seattle Pacific University, she started a local chapter of the Society of Physics Students. For a while, she was on her own. “I was the president and only member,” says Little.

That didn’t last long. Several people joined by the time she graduated — and the club is still going.

Little went on to co-found a community-oriented undergraduate physics education program called the Compass Project at the University of California, Berkeley, while pursuing a doctorate in physics. She wanted to bring the “family, community-like feel” she experienced in Seattle Pacific’s physics program to Berkeley students.

My time at SPU left a big impression on me,” she says. “We — the undergrads — were always treated like colleagues by professors.”

The Compass Project aims to help undergraduates, especially students from underrepresented groups, succeed in a demanding physics program. Little can relate firsthand to their challenges: During her first year of graduate school at Berkeley, she had to retake a quantum mechanics course and had to take extra classes to catch up.

“I was trying to make sense of struggling academically for the first time,” she says. And as a teaching assistant, she saw that “a lot of my freshman students were experiencing the exact same thing.”

Little, who is part Native-American, also noticed a lack of diversity among the students. So in 2006 she began working with two fellow graduate students to develop a two-week summer physics program for incoming freshmen, particularly women, minorities, and first-generation college students. The graduate team studied science education strategies, solicited funding, and launched the first summer program with 11 undergraduates in 2007.

The Compass philosophy is to give students a sense of “what’s really cool about physics,” rather than offering remedial instruction to shore up knowledge of math or science, says Little. During the first summer program, for example, students focused on how earthquakes contribute to knowledge of the Earth’s innards. The teachers used blocks connected by springs to demonstrate waves moving through a material, and students took a tour of the fault line that runs through Berkeley’s football stadium.

The program also emphasizes problem-solving skills — and reassures students that struggling is normal. In some classes,the undergraduates give graduate instructors a new problem and watch them grapple with it. Students can push a “jargon buzzer” when they hear a word they don’t understand. “We really try and create a safe space,” says Little. “It’s totally OK to mess up.”

Learning to work in teams is crucial, says Gina Quan, a former Compass participant. “You’re sort of doomed if you can’t talk to other people about problems in physics, because it gets so hard,” she says. The approach seems to be working: 92 percent of Compass’ 2007 and 2008 students have graduated or are expected to graduate from Berkeley this year, and 85 percent majored in science, technology, engineering, or math. Last year, the Compass Project won the American Physical Society’s Award for Improving Undergraduate Physics Education.

Little has changed her graduate research focus from physics to science education — another interest piqued during her time at Seattle Pacific. She draws on data from workshops with Compass students to study how undergraduates think about physical patterns.

SPU’s Physics Department often applied concepts from science education research in the classroom, such as learning in small groups, says Little, who was an undergraduate teaching assistant during her senior year. “I took those skills with me into my work at Berkeley,” she says.

Little’s community-building skills were evident even at SPU, says Vokos: “She had this glue that keeps a community together.”