Watch In the Pines by Shep Films on Vimeo. 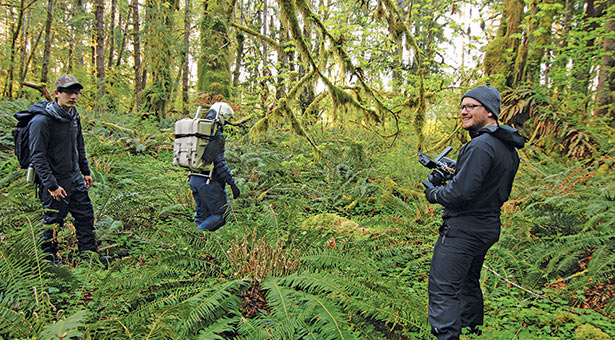 Imagine a future where SPU graduates visit faraway planets; where they design and build space-travel suits for protection in toxic environments; where they film awe-inspiring footage for audiences. Imagine the whole endeavor is funded by volunteers.

Zeek Earl ’10 and Chris Caldwell ’09 are making it happen. Shep Films, Earl’s and Caldwell’s filmmaking company, is filming a science-fiction short film called Prospect. In it, a father and daughter dig up a valuable resin in a rain forest on an alien world, only to be threatened by a villain called “The Bandit.”

Earl and Caldwell — co-directors of the film, with Earl serving as director of photography and Caldwell as writer — have momentum, thanks to the enthusiasm generated by their first short film. In the Pines, a $3,000 alien-abduction movie paid for out-of-pocket by the filmmakers, impressed audiences at South by Southwest, the Palm Springs International Short-fest, the Atlantic Film Festival, Hollyshorts, and other festivals.

Both films use Northwest forests for their location.

“To me,” says Earl, “that physical environment is a large character in itself. With In the Pines, we used macrophotography to make the natural world feel alien and surreal. Prospect takes that further, using a real forest in a way that feels otherworldly.”

Prospect is far more ambitious than Pines, but they’re not worried. They’ve already raised $21,298 via Kickstarter, a website that supports creative projects through “crowd funding.” Kickstarter even featured Prospect as a “Staff Favorite” project on their home page.

“We didn’t just sit in front of the camera and say, ‘We have this crazy idea. Give us money,’” says Earl. He and Caldwell front-loaded their Kickstarter campaign with a high-quality teaser trailer to excite potential investors.

Prospect blasts off with a talented team that includes producer Brice Budke ’10, first assistant director Ian Van Der Werff ’10, camera operator Alex Park ’10, assistant production designer Josh Miles ’09, set photographer Nate Rogers ’11, composer Daniel Caldwell ’12, recordist Clark Rhee ’12, and Hannah McMillen ’11, who is in charge of keeping the cast and crew fed on the set. Costumes — space suits — were designed by Olivia Lenz ’11, a NASA space technology research fellow at the University of Washington. Shep Films have a handmade, naturalistic quality that stands out in an era of digitally animated spectacle.They’re shoot- ing Prospect in the Hoh Rain Forest on Washington’s Olympic Peninsula. Why? According to Earl, it has the biggest ferns.

“I’m not going to find the most convenient forest,” says Earl. “I’m going to look at 25 different forests and figure out the individual sizes of the ferns. That’s important to me.”

The word from experienced producers? “Keep doing it up there.”

Earl laughs. “Someone suggested that we should film in Louisiana because of tax breaks, and we said, ‘No way. Get out of here!’”

When it comes to making it in Hollywood, perhaps the best strategy is to stay home. Ferns may, indeed, be greener right here on this side of the fence.