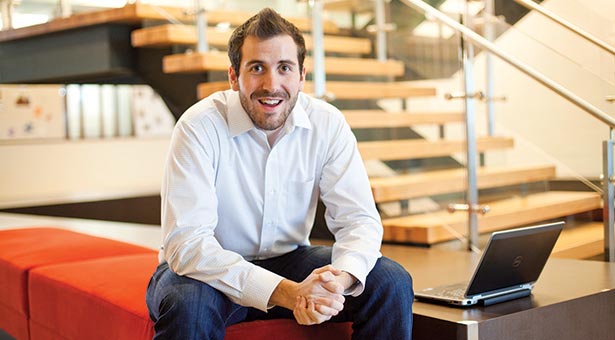 The campus of multinational software giant Microsoft is just 16 miles from the Seattle Pacific University campus. More than 150 Seattle Pacific graduates currently put their knowledge and skills to work in a variety of Microsoft departments from the Bing group to the Xbox group.

At the invitation of the SPU Alumni Association, nearly 50 of those alumni recently gathered at Microsoft for lunch. Sue McKenna Kinzer ’82, on staff in human resources at Microsoft, provided the space.

Dan Martin greeted the gathering as SPU’s new president, and told the alumni, “We love seeing you in your vocational element.”

I was very excited to meet the new president,” says SarahBeth Rucks Donaghy ’05, a program content manager who coordinates events such as Hack-A-Thons to help Microsoft employees’ creativity flourish. On the job six months, she was also grateful to discover which of her co-workers were also former Falcons.

Esther Haak ’06, a senior product planner for Xbox, thought “the chance to connect was awesome.”

Associate Professor of Management and Information Systems Ryan LaBrie ’91, MS ’97, enjoyed seeing former students — and former colleagues. “About half of those in attendance had taken a course from me,” he says. Prior to entering the classroom, LaBrie spent 10 years with Microsoft in product development, database training, and program management. “Our alumni are doing really cool stuff and working on key products, including Microsoft Office, Windows Phone, the Surface tablet, and more,” he adds.

Professor of Accounting Ross Stewart noted that Microsoft alumni give back to SPU in many ways. They have given to support student scholarships, judged the annual Social Venture Plan student competition, mentored students, and arranged School of Business and Economics student study abroad experiences with Microsoft–Beijing.

“They’re proud of their SPU education,” Stewart says. “It was wonderful to see our students doing well in a world-class company.”