Feed your need for sports news between issues of Response. Visit spufalcons.com for up-to-date news, stats, photos, and video. And follow @SPUSports on Twitter.

By Mark Moschetti | Photo by Sarah and Chris Rhoads 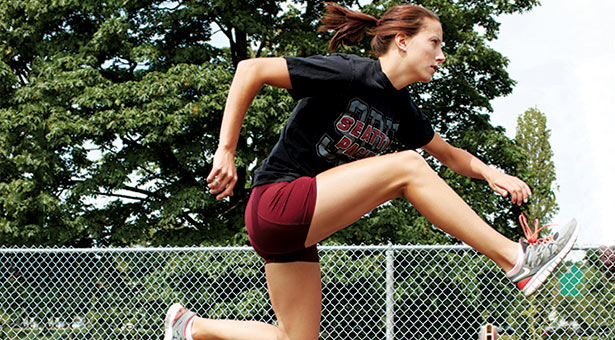 Injured in her sophomore year, Ali Worthen came back as a fifth-year senior to become a national champion in the heptathlon this May.

For the second straight year, the Seattle Pacific University Falcons have a national women’s track and field champion.

Ali Worthen, after a third-place finish in the women’s heptathlon last year, won the NCAA Division II title on May 23–24, 2013, by racking up 5,340 points during the two-day, seven-event test in Pueblo, Colorado.

Worthen posted a pair of personal-best marks: 14.08 sec- onds in the 100-meter hurdles to open the meet, and 36 feet, ¾ inches in the shot put. She was third in the overall standings at the end of Day 1, moved up to second after a solid long jump to get Day 2 going, and was still second — albeit just five points behind — heading into the meet-ending 800 meters.

Worthen finished third in that race and claimed the crown.

The Falcons had two other All-American performances at NCAAs: Katy Gross ’13 in the heptathlon, and the 4x400 relay team of Kishia Mitchell, Emily Quatier, McKayla Fricker, and Jasmine Johnson. That same foursome also earned All-American status in the 4x400 at NCAA indoor nationals in March.

In addition, 53 Falcons earned conference all-academic recognition. Along with those, 10 were academic all-district selections, and 13 achieved national all-academic status. Seattle Pacific is also in contention for the GNAC Academic All-Sports Award, a trophy it has won three times overall. That will be announced in July.

Worthen won the Ron Grady Athlete of the Year award at the annual Athletic Awards Banquet May 30, 2013. It was her second Grady award, having won it previously in 2011. The Falcon Awards for Excellence — the highest honor an SPU athlete can receive, incorporating athletics and academics — were presented to Worthen, Nyone, Swanson, Wall, rower Phillip Mach, and basketball player Rachel Murray.