You can listen to many of the sermons Mark Abbott preached at Seattle Pacific University Chapel services online. Audio archives of Chapel addresses are available at www.spu.edu/itunes.

The Shepherd Across the Street

A Life of Urban Ministry 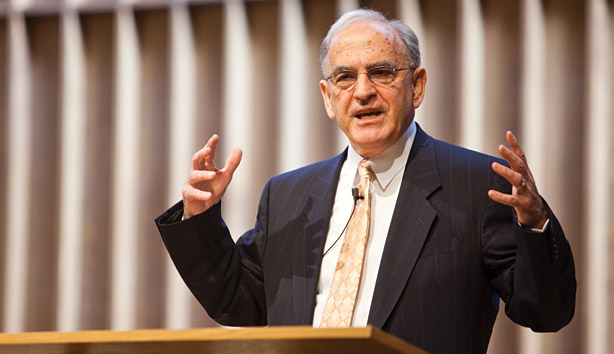 From the red-brick church adjacent to Seattle Pacific, Abbott regularly preached and performed dedications, baptisms, weddings, hospital visits, memorial services, and the like for nearly 28 years. He thrived in urban ministry, where, he says, he gained "a growing appreciation for the vitality and challenges of the city."

Abbott first came to Seattle after an invitation from SPU and at the recommendation of fellow Asbury Theological Seminary graduates, theology professors Frank Spina and Eugene Lemcio. When the scheduled speaker for the University's 1982 Christian Commitment Week canceled, Campus Ministries called Abbott, who was pastoring College Church in Houghton, New York, at the time. "I left western New York in the worst spring blizzard I can remember — and flowers were blooming and everything was green in Seattle," he says.

The mild weather got him thinking, and soon Abbott was receiving phone calls about the pastoral search at First Free Methodist. Before the end of 1982, he accepted the appointment to FFMC, and he moved with his wife, Mary Ann, and their two young children to Seattle.

In addition to pastoring FFMC and serving as SPU's campus pastor, he donned a clerical collar and walked the city streets late on Sunday nights with Operation Nightwatch's ministry. He and Matt Whitehead, then pastor of Lakeview Free Methodist Church, talked and prayed with the homeless on Capitol Hill and in Pioneer Square. They became regulars at the Rendezvous and Comet Tavern.

"Mark had a calming presence in the lives of people on the streets," says Whitehead, who's now superintendent of the Pacific Northwest Conference of the Free Methodist Church. "He seemed as comfortable talking with homeless on the streets as he was talking from a pulpit."

"Mark has been our pastor, our preacher, our teacher, our wise counselor, and our friend," says SPU President Philip Eaton. "He preaches and teaches from a deep centeredness in the Scriptures, clearly anchored by meaningful prayer, challenged by the issues of the day, and always with a message of hope."

Retired from FFMC, Abbott will now teach homiletics in Seattle Pacific's M.Div. program and elsewhere, and he and his wife will take a short-term mission trip to Burundi in 2011. "My calling to ministry has not ended," he says. "It's redirected."