SPU Affirms a Vital Voice of Faith in Seattle 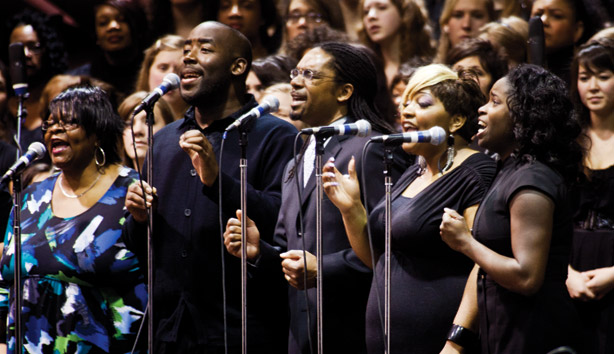 Hundreds of singers performed in the GospelFest mass choir.

Though no one was there to record it, the roots of modern American gospel music can be traced to the first African slaves arriving on American soil in 1619, says Robert Darden, director of the Black Gospel Music Restoration Project at Baylor University, and a featured speaker at Seattle Pacific University's GospelFest10 Education Symposium this past May. Once "corn ditties" sung in secret after a day of back-breaking labor, these expressions of faith evolved over hundreds of years into sophisticated, soul-stirring music with a widespread appeal.

"Our primary objective is to give this wonderful music rigorous study and recognition in the academy," says Associate Professor of Music Stephen Newby, SPU director of University Ministries and the Center for Worship, and coordinator of Gospel­Fest. "Gospel music is traditionally an artistic expression of the good news of Jesus Christ, and so it's appropriate for a Christian university to steward these treasures of our American musical canon and Christian heritage."

Another motivation for taking gospel seriously at Seattle Pacific is that the University is located in the heart of a city with a vibrant gospel music community — inside and outside of churches. "We want to support and affirm this vital voice of Christian faith in our city," explains Newby.

"Few early slave owners introduced Christianity to their workers," says the author of People Get Ready! A New History of Black Gospel Music. Worse, he says, the "Christianity" the owners did display was a twisted form of religion that used the biblical admonition "Slaves, obey your masters" (Ephesians 6:5) to justify slavery and its abuses. 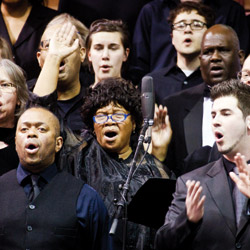 Darden notes that by listening outside white churches, taking covert lessons from the few literate slaves, and other such means, African Americans heard enough of the real gospel to encounter and practice a religion "built on a personal relationship with a loving, forgiving, inclusive Jesus."

Their growing faith birthed "spirituals," songs that blended African musical elements, such as call-and-response singing, with a compelling vision of the Christian story. This vision remained constant as the music evolved, from the post-Civil War arranged spiritual known as "jubilee" to "the gospel blues" invented by Thomas Dorsey, to the powerful anthems of the civil rights movement. Today's gospel music still contains the distinctive musical and theological elements that have sustained its singers for more than 400 years.

"On one hand, gospel music points to liberation theology," says Newby, who is a composer, conductor of the SPU Gospel Choir, and gospel/jazz musician. "On the other hand, it is essentially about Jesus Christ reconciling all things back to God the Father."

The two-day GospelFest10 culminated in a concert at SPU's Brougham Pavilion on May 1, drawing 2,000 people and taking on the jubilance and pulse of revival. At the event, four individuals from the Seattle area were honored for their local and national contributions to gospel music: Elias Bullock, director of University Presbyterian Church Gospel Choir; Jacqueline Hardy, music producer/promoter; Jo-Anna Salomon, songwriter, arranger, and worship leader; and Valerie Taylor, songwriter, vocalist, and music producer.

"Thanks to the efforts of Dr. Newby and the support of the SPU administration, the Pacific Northwest is becoming a regional center for the preservation of the black gospel musical art form," says Juan Huey-Ray, founder and director of The Sound of the Northwest, a community-based chorus dedicated to the perpetuation of the Negro spiritual.