During Winter Quarter 2012, Assistant Professor of Biblical Studies Laura Sweat is guiding readers through this gospel at spu.edu/lectio.

Into the Promised Land 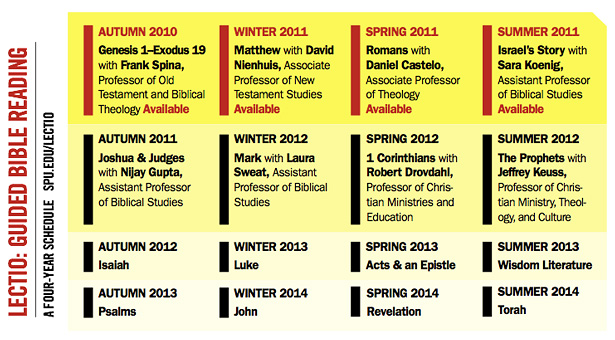 Few Christians spend much time in the Old Testament, and Joshua and Judges likely rank among the least-read of its 66 books. After all, when we have the beautiful story of Jesus in the Gospels, or the inspiring theological ruminations of Paul’s letter to the Romans, or the bewilderingly majestic visions of John in Revelation, why bother with Joshua and Judges? With their focus on war and brutality, their stories about a prostitute lying to save the day, an animal torn limb from limb, a concubine hacked into pieces — need I go on? — aren’t these books a little too gory, too barbaric, too out of place with the New Testament witness? What is this stuff doing in the Holy Bible?

I am going to present three reasons why you may want to give Joshua and Judges another look.

First, Jesus’ own name, pronounced in Hebrew, would be Yeshua, the same name as “Joshua.” “Jesus” is “Joshua.” In a sense, Jesus is the new Joshua. So it might help to know a bit about Joshua and his story in order to understand how Jesus was and is like a new Joshua. The name Yeshua means “The Lord rescues.” Joshua’s name probably reminded the Israelites of God’s rescue of them from Egypt and their entry into a “land flowing with milk and honey.” Jesus’ name marks a new exodus from the power of sin itself and entry into a deeper and more permanent relationship with God (see Matthew 1:21).

Second, the period of Israel’s history covered by Joshua and Judges — when the events of the
claiming of the “Promised Land” took place — is discussed in positive terms in the New Testament.
Hebrews 11, sometimes called the “Hall of Faith,” recounts numerous examples of great faith operating in the Old Testament. These include the faith of the Israelites when the walls of Jericho fell (11:30), the faith of the Canaanite prostitute Rahab who trusted Israel’s God at great personal risk (11:31), and the faith of some of the judges of Israel who led the people (11:32–33).

Finally, many Christians throughout history have found wisdom and inspiration in these stories. For example, Martin Luther King Jr. used the black spiritual “Joshua Fit the Battle of Jericho” as a call to fight discrimination (albeit with passive resistance) in spite of powerful enemies and unfavorable odds.

The Bible distribution and evangelism organization Gideons International found inspiration in the story of the judge Gideon, an ordinary man called by God to do extraordinary things for the good of his people.

In the Lectio guided Bible readings on Joshua and Judges, we will work through these enigmatic, but theologically rich, historical books of the Old Testament, looking at the grand story of God’s faithfulness in spite of his people’s weakness, his desire to use these flawed mortals to reveal his power and glory, and the ways in which we catch glimpses of a divine plan that is set on a path looking forward to Yeshua the Messiah.

Buckle your seatbelt; we’re entering the land of Canaan, and it is going to be a bumpy ride!