With Energy to Spare 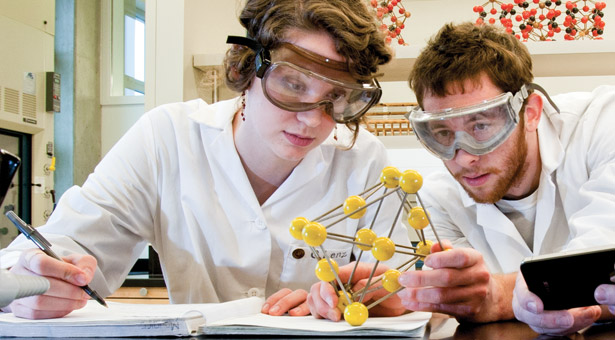 Olivia Lenz (left) was honored at Commencement 2011 with the Wesley E. Lingren award, for the graduating University Scholar who most exemplifies the high ideal of academic excellence and Christian service in the SPU honors program.

If you turned on CNN this past April, you may have seen Olivia Lenz '11 on the left side of the split screen. Wearing a red shirt and grey blazer, she explained how her research on zinc oxide nanowires could be used to harvest energy from everyday movement.

"You always run out of power on your iPhone. We run those things down all the time," Lenz said, appearing as at-home on screen as the anchor. She went on to explain how a shoe insert could gather energy from a person's steps and charge a cell phone.

Lenz's research came from her time in NASA's MUST (Motivating Undergraduates in Science and Technology) program. She's spent the past three summers doing research with NASA in the Ames Research Center in Moffett Field, California, after applying for the scholarship her freshman year at Seattle Pacific University.

Lenz and other MUST teammates microwaved zinc powder to create zinc oxide nanowires, which create an electrical current when they are bent or strained. The team investigated the properties of nanowires created in the lab versus nanowires that they created in a reduced gravity aircraft at NASA's Johnson Space Center in Houston. The experiment did not go exactly as expected, but Lenz has found that's a part of research.

"There's always this ‘Hmm ... that's interesting' moment. That's where good science comes from," she says. "That's why I like research. There's always more to explore."

Lenz's interest in learning is not just limited to science. At SPU, she majored in chemistry, minored in clothing and textiles, and took University Scholars courses, which mostly focus on the arts and humanities. In her spare time, Lenz creates her own patterns and sews. She has made about 50 outfits so far.

During her time at Seattle Pacific, Lenz found countless research opportunities both on and off campus. She's researched soap bubbles at the University of Washington, colored plastics at Esterline Control Systems, and — in SPU's labs — the relationship between garlic oil and stainless steel.

Kevin Bartlett, associate professor of chemistry, has worked on two different research projects with Lenz. "She is tenacious when she attacks a problem. What you really want in an undergrad researcher is someone who will put the bit in their teeth and run with the project on their own — that's Olivia," he says.

This autumn, Lenz begins working toward a doctorate in material science at the University of Washington. She plans to study how to make solar cells more efficient.

Who knows? You may find her talking about solar panels on CNN next year.