At Homecoming 2012, Alumni Gather for Celebrations 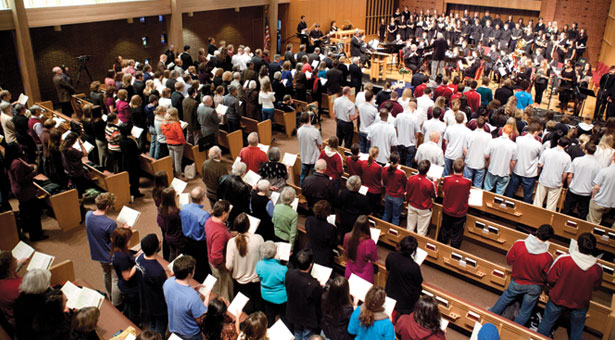 Students, alumni, faculty, and staff flocked to First Free Methodist Church for the Homecoming Celebration Chapel with worship led by the SPU Gospel Choir and the Wind Symphony Orchestra.

Festivities began with the Seattle Pacific University community coming together for a packed  worship service (above) in which Alumnus of the Year Alec Hill, president of InterVarsity Christian Fellowship, talked about one of Christ's lesser known parables.

President and Mrs. Philip Eaton were named honorary alumni. Students prevailed in the first  annual student–alumni flag football game. Nuptial madness ruled in a fresh take on Shakespeare's
comedic Much Ado About Nothing. And in a nail-biter of a basketball game, the Falcon men sealed the fate of their opponents in the final five seconds.

An entire season of excitement at Seattle Pacific University? No; it was a single long weekend of action, nostalgia, laughter, and awards. Homecoming 2012 celebrated Seattle Pacific as a place of “flourishing” across multiple reunions, luncheons of honor, and events as varied as an ensemble concert and a Young Alumni tailgate party fragrant with the aroma of grilled hot dogs.

Alumni from as far away as Kentucky made the Homecoming pilgrimage. Among the nine reunions devoted to graduating classes ending in a “2” or “7,” the Class of 1992 drew nearly 75 people.  Because they didn't want their reunion to end, Greg Hunter '92 hosted an “after reunion party” well into the evening at his nearby home.

“My three or four best college friends were at Homecoming with their spouses,” says Superior Court Judge Mike Sullivan '72, who says another highlight was Philip Eaton's address, titled “Sing Us a Song of Joy,” at the President's Luncheon. “It was an uplifting presentation,” says Sullivan. “Exceptional!”