Did you go on SPRINT while an SPU student? Share your story, and read what others said!

You can also check out where students will go for the Summer 2012 SPRINT trips. 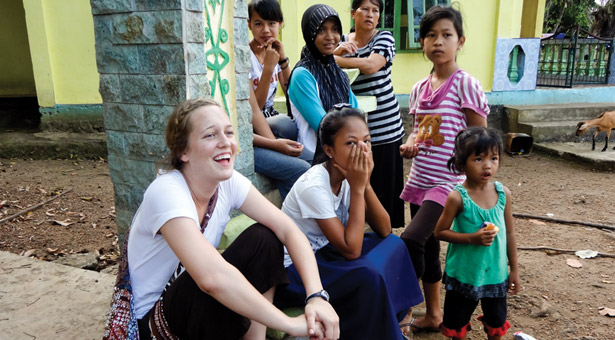 “I still don’t know how to put what happened to me on the trip into words,” says Lauren Finke (left), who traveled to Indonesia with SPRINT in 2011. “I felt like I understood the vital role Christ had in my life only after going on the trip.”

And what happens after they get back?

The best way to find out, says doctoral student Julianne Bergman, is to wait. As part of a research team led by Professor of Clinical Psychology Lynette Bikos, Bergman and others are exploring
the long-term impact of SPRINT on the students who make these journeys each summer.

“It takes them a few months to realize what happened and how that experience plays into the rest of their lives,” she says. “The light bulb goes on after about six months.”

At that point, according to surveys and interviews from Bikos’ team, SPRINTers show a greater interest in global affairs. They’re more interested in social justice issues. The study participants  also showed strong increases in “vocational identity”: They have a clearer vision for their academic and career goals.

“SPRINT is a lifelong process, not just however long you’re in the country for,” says Michelle Suh, a junior who traveled to Guatemala in 2010. To help raise money for her trip, she got creative, selling 600 bracelets that were made by women in the Philippines. Now, as fundraising coordinator for the SPRINT core team, she helps other students connect with supporters and understand the  global impact of their fundraising projects, such as selling direct-trade Kuma Coffee and bracelets.

“A dollar for each bracelet goes to the SPRINTer, and a dollar goes to the women who made it,” she says. “We’re not just fund raising for ourselves.”

Over the years, the SPRINT program has evolved into a process that takes nearly one year from application until the students’ final debriefing meeting months after the trip.

Participants undergo extensive pre-trip preparation with training meetings and team-building workshops, led by SPRINT Core student leaders. They take a course, “Living in Another Culture,” taught by Assistant Professor of Global and Urban Ministries David Leong. Part of this  preparation, Leong says, involves making them aware of critiques of short-term missions as “voluntourism.”

“I don’t want to squash their enthusiasm, but I want their enthusiasm to be balanced with wisdom,” he says. “They aren’t saving the world by traveling for a summer. Instead, they’re going as partners and co-learners with the people they serve.”

Senior Rediet Mulugeta traveled to Rwanda with SPRINT in 2010. That journey led to an  internship with nonprofit organization Rwanda Partners’ Seattle office, where she coordinated shipping baskets. This year, she’s part of team that created a social venture plan called “Tesfa Netela,” which means “Hope Scarf.”

In the plan, Ethiopian women who have had fistula surgery would be able to weave and sell scarves to earn a living. Her SPRINT trip and internship fueled her thinking about the best ways to get involved in global development.

“After I visited Rwanda and interned with Rwanda Partners, I knew how effective their model was in alleviating poverty,” she says.

The plan earned an honorable mention in SPU’s Social Venture Plan Competition and was entered in the Be the Change Competition, sponsored by Washington Global Health Alliance. With  teammates Sefanit Ghezahegn (who traveled to Uganda on a 2011 SPRINT trip) and Skylar Piro, Mulugeta hopes the project will one day become a real program.

Stories like Mulugeta’s are encouraging to Owen Sallee, who says he sees students coming back from their trips saying, “I had this epic experience. Now, what do I do with it?”

As coordinator for global and urban involvement in SPU’s John Perkins Center, Sallee advises the
student leaders of SPRINT. He’s also been using feedback from Bikos’ research team to improve
the post-trip debriefing process for students — wherever they go next.

“Some people will come back from SPRINT and sense a calling to do long-term overseas missions,” he says. “But it’s also equipping people to think about how to serve their communities back home.”

Do you want to help support students serving on SPRINT? This year, Kuma Coffee will donate a percentage of online purchases to SPRINT scholarships.

Did you serve on a SPRINT trip while an SPU student? Share your story here, and read what others said.