A Fresh Take on Film

Check out Response Onscreen. You'll discover thoughtful reviews, recommendations, and conversations about film, including an interview with Blue Like Jazz director Steven Taylor. 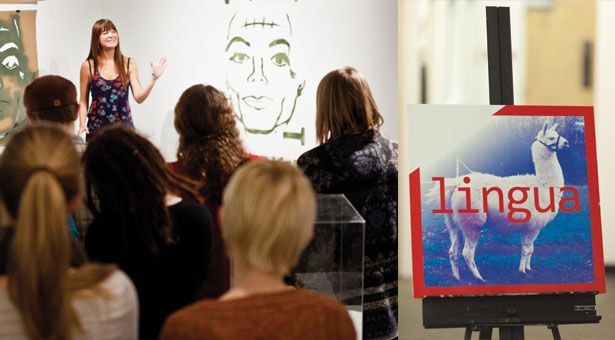 “Being; Becoming” was the theme of a Lingua event at the SPU Student Arts Center, and the Winter Quarter “zine,” full of student writing and art, was unveiled there. Photo by Daniel Sheehan.

They're everywhere. They're in the Library. The Seattle Pacific Art Center. The Weter Lounge coffee shop.

They appear on event posters. On journals full of artwork. On SPU's website. And now, you'll find them stamped on small manila envelopes. (Llama-lopes?)

If you find one of these packets, open it up for even more surprises. For example — a letter to Adam from the rib that God removed: “Hey Adam, do you miss me?” A poem full of melancholy
from the “lone occupant of a grey globe.” A photograph of light shining out from breaks in a shabby wooden crate, a mystery not quite contained.

The llama represents Lingua, Seattle Pacific's literary and art journal. And as journals go, Lingua is an unpredictable animal.

The journal's staff, inspired by the multiformat periodical McSweeney's, have taken to reinventing their journal in multimedia ways. They've released 2011–12 “zines” as a booklet, as a downloadable PDF, and in this new packet of postcards. They also host a series of events and a blog — thelinguajournal.com, updated weekly with new student work.

Lingua's faculty advisor, Professor of English Doug Thorpe, says that a new collaborative spirit has transformed a literary journal into an enterprise that engages a wide variety of students, cultivating
an artistic community around original poetry, prose, visual art, and music. New technological resources, he says, have enabled students “to produce something that is very professional-looking, very creative, for a relatively small amount of money, and, to an extent, a small expenditure in terms of technology and time.”

“In the last 10 to 15 years, it's evolved into something that is aesthetically very beautiful, very high quality,” Thorpe says. In fact, he hasn't missed a Lingua journal “unveiling” event since it started 15 years ago. “It's one of my favorite moments of the year.”

If the postcard package format of Lingua's winter zine looks rather like an “unfinished” journal, that's deliberate. These puzzle pieces illustrate a theme — “Being; Becoming.” It's also the theme of an art show, which Lingua produced in partnership with another campus arts group, the Curatorial Club.

Senior Heidi McElrath, Lingua's literary editor and president of the Curatorial Club, explains that “Being; Becoming” relates to the way university students experience growth and change. She was excited to bring three-dimensional art into a Lingua event. “We've had some really cool sculptures,” says McElrath, “and somebody submitted a set of handmade dolls that are gorgeous — things that will look better in a gallery than in a journal.”

That's only one of their new collaborative events. “We've intentionally sought out events where faith and art interact,” says editor-in-chief Jordan Bonney. Lingua participated in Exhale, a
night of worship during which original art is created. In March, they joined Student Ministries in
bringing the arts to residents of Tent City 3, inviting them to participate in the creation of new artwork on large canvases.

Still, Bonney is careful to define Lingua's role at SPU as an opportunity for students to express  themselves creatively, rather than as a journal of “Christian art.”

McElrath agrees. “At SPU we have a wide variety of students with different faith backgrounds,” she says. “Those are voices we want to be heard and that can be heard through art.”

In this welcoming spirit, Lingua is taking the celebration and discussion of the arts beyond campus borders, planning collaborative events with Bricolage and Fragments, the arts journals at the University of Washington and Seattle University.

Working on Lingua is, of course, as much about “becoming” as “being.” McElrath dreams of becoming a novelist. “Can a 21-year-old be a literary fiction writer?” she asks. For Bonney, one of the first visual communications majors to serve as Lingua's editor, reinventing Lingua is all part of his “trajectory” toward a dream job — working at ArtForum magazine.

And speaking of dreams: Bonney eats, breathes, and even sleeps Lingua. “I woke up in the middle of the night the other night with an idea,” he says, his smile almost mischievous. “It would be cool if Lingua was a monthly publication.” Apparently this happens to him often. Maybe he talks to llamas in his dreams.