I Corinthians Is a Snapshot of God's Care for the Church 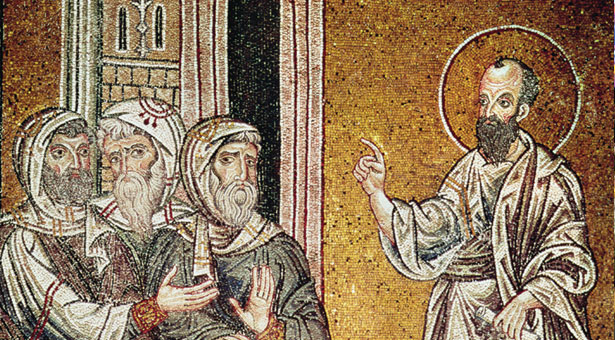 The Apostle Paul developed relationships with church communities through his missionary journeys. (“St. Paul Preaching to the Jews in the Synagogue at Damascus,” from Scenes from the Life of St. Paul (mosaic), Byzantine School, 12th century. Duomo, Monreale, Sicily, Italy.) Courtesy of the Bridgeman Art Library.

We are fond of “the best of” lists that tell us the top places for eating out, raising a family, healthy
living, or whatever else we are interested in finding. My hometown, Seattle, shows up on many
lists as one of the best cities in the United States (though not on the list of best places to get a suntan!).

Corinth also would have been on many “best of” lists. It was a young port city with a strong economy. Cosmopolitan in flavor, Corinth was a city where people could come and move up the
social and economic ladder. Though there was a small Jewish population present, Corinthian religious life revolved around Greek and Roman pagan religions.

We are given a snapshot of Paul's relationship to the Corinthian church in 1 Corinthians, the text for Spring Quarter's Lectio: Guided Bible Reading. When we expand that snapshot for a more complete picture of their relationship, we see that this relationship was very important to Paul. He visited Corinth on his second missionary journey (Acts 15:36–18:22). He founded the Corinthian church (Paul claims to have planted and fathered the congregation) and stayed in Corinth 18 months, from the spring of A.D. 51 to the autumn of A.D. 52.

During this time, Paul supported himself through tentmaking, while simultaneously proclaiming Christ in the synagogues. When his preaching met opposition in the synagogues, Paul relocated his ministry to Titus Justus' home. According to Acts, many Corinthians became believers and were baptized, though Paul faced continued opposition from some quarters. After leaving Corinth, Paul sailed to Ephesus for a brief stay, then traveled on to Jerusalem and his home base of Antioch.

How does this information “define the relationship” between Paul and the Corinthian church? It suggests what we will see in the letter: Paul has a huge personal stake in the church's success and well-being, and in maintaining a good relationship with the church. Small wonder that Paul's letter pulls out all the stops in his effort to convince the Corinthian Christians to claim their identity as a holy people, to heed the call to discipleship, and to unify around the cross of Christ.

In the same way, God has a huge personal stake in our success and well-being. God has invested in our lives through “visits and letters.” As the author of Hebrews declares, “in these last days [God] has spoken to us by a Son” (1:2).

Join Robert Drovdahl, professor of Christian ministries and education, as he guides readers through I Corinthians in Lectio: Guided Bible Reading.