Want to feed your need for sports news between issues of Response? Visit spufalcons.com for up-to-date news, stats, photos, and video, and follow @SPUSports on Twitter. 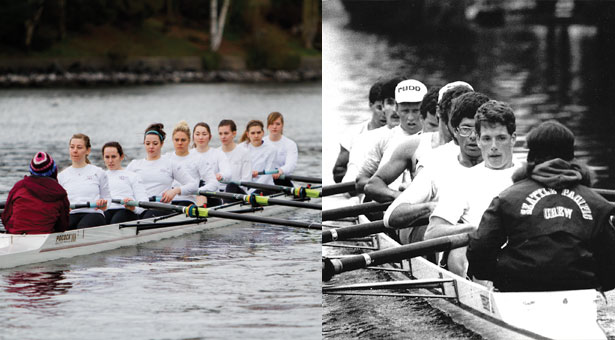 Left: Members of SPU's current crew squad rowed against alumni at Homecoming. Right: A photo that first appeared in Response in 1994 shows a Falcon men's squad putting in a team effort.

Seattle Pacific University crew reunions are anything but typical.

Alumni rowers return annually. But in place of name badges, they are issued oars. Instead of
casually circulating the room, they board a boat and race against the current crop of first-year
(novice) rowers.

“That's probably what draws me in — a chance to get back out on the water,” says Sarah Zorn Hanson '05, who competed collegiately 2001—04.

“When you are away from it, you pretty much idealize what it's really like out there,” Hanson adds. “It's a lot more painful coming back and rowing as an alumna, that's for sure.”

The 2012 competition proved particularly satisfying for one group of former rowers. They won
the men's four-oared event, outracing the current novice crew.

This year's reunion races on January 28 were followed by a banquet brunch to celebrate the start of the 40th year of crew at Seattle Pacific. That anniversary event filled the lower gym in Brougham Pavilion.

Every men's coach in the program's history attended the banquet. That included Bill Mickelson, whose niece, Anna Mickelson Cummins, was a guest speaker. She is a U.S. Olympic gold medalist
and world champion rower. Most of the coaches from the women's program were in attendance as well.

“We celebrate a really rich history. We are thankful to be here and thankful to have had such a great past and some really successful crews,” he says.

The sport was introduced at Seattle Pacific in the fall of 1972 when graduate student David Covey gathered some men on campus to form a rowing club. A national champion as an undergraduate at the University of Washington, Covey discovered interest among women, as well, and brought  Bernie Delke aboard to coach them.

The early days of sharing a single, outdated hull and launching from the Sand Point Naval Station set the stage for the present era of modern racing boats and an on-campus shellhouse in the  basement of Brougham Pavilion.

Rowing became a varsity sport in 1978, and SPU crews soon took their place as a fixtures on medal platforms.

The 1981 men's open fouroared crew became the first from SPU to row in a national-caliber regatta, finishing third at the Dad Vail, the unofficial small college championships that take place
annually in Philadelphia.

In 2000, the Falcon fleet captured its first national championship. The women's varsity four raced to victory at the Champion International College Regatta, the first of seven national titles for SPU crews.

Those triumphs were revisited during the reunion brunch. “The stories are amazing — everything from wading the boats in ice-cold water over at Sand Point those first days to walking them down the railroad tracks right here and running from a train,” says Jefferson.


Are you an alumni rower, too?

Share your memories here and read about what others write.