From Upset to Regionals, Basketbal Marks a Sweet 16 Season 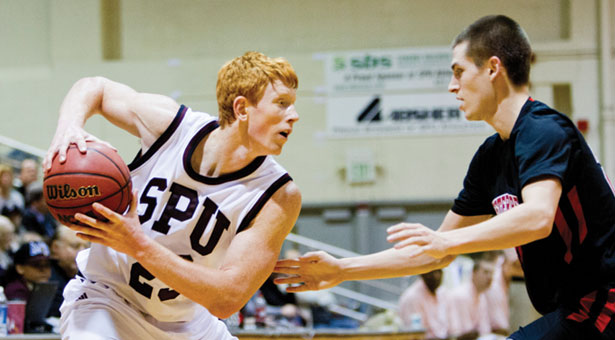 Jobi Wall, a junior who transferred to SPU this school year from Colorado Christian University, averaged 11.1 points and 5.7 rebounds.

Their season started with a headline-grabbing upset win at national power Arizona in Tucson. By the time they were finished, the Seattle Pacific University Falcons had gone all the way to the NCAA Division II West Regional men’s basketball championship game in Bellingham.

Those hardwood heroics were among several highlights for SPU during the winter sports season. Seattle Pacific’s men set the tone for their basketball season on the very first night when they ventured to Arizona for an exhibition game against a team that perennially is one of the best in Division I, and hung on for a 69–68 victory.

When the games started to count in the standings, SPU put together a 23–8 record. That included 13–5 in Great Northwest Athletic Conference play, good for third place. The Falcons won their first two NCAA regional games before falling to Western Washington in the Sweet 16 round, 56–50.

Women's Basketball
Seattle Pacific went 17–10 overall. The Falcons tied for third in the GNAC at 11–7 and qualified for the conference tournament. The Falcons scored an 82–66 victory at Western Washington in December, their first road win against the rival Vikings since 2008. On February 2 in Brougham Pavilion, SPU knocked off No. 8-ranked Alaska Anchorage, 67–62.

Indoor Track and Field
The Falcon women captured the GNAC championship for the ninth consecutive year, winning seven of the 16 individual events. Ali Worthen won the long jump and 60-meter hurdles, and Katy Gross won the pentathlon for the second straight year. Worthen went on to an All-American  sixthplace finish in the pentathlon at NCAAs, and sophomore McKayla Fricker won GNAC and was fifth in the 800 meters at NCAAs to earn All-American.

On the men’s side, junior Nate Seely won his third straight conference 800-meter title, and Nate Johnson was the GNAC heptathlon champion for the second year in a row.