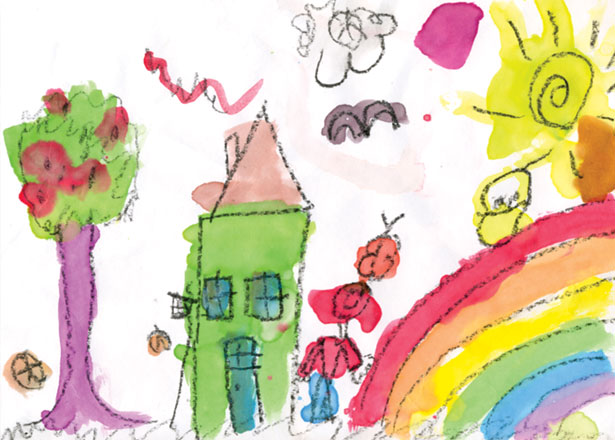 Elliott Kim, 7, would like to become a famous artist.

He first began making art at age 3, and he enjoys drawing and painting, which is perhaps no surprise, given the artistic inclinations of his dad, Response Art Director Richard Kim.

And what exactly does becoming a famous artist involve?

Well, you make famous art, says Elliott. “Everybody really likes it. They think it has really good details and looks just like what they were making.”

Elliott is learning a bit about art in his first grade classroom at Seaview Elementary in Edmonds, Washington. He’s spent time with lines (his favorite is a horizontal line), shapes (he recently discovered parallelograms), and colors (he prefers red “because it’s the first color of the rainbow”).

“We did the thing where we rub a crayon against a leaf and it makes something,” he adds.

In this particular work, rendered in crayon and watercolor paint, Elliott says he has drawn “a bird, a rainbow and a pot of gold, because I made it in March, and a cloud and some wind, and there’s me and a house and a basketball hoop and a basketball and a butterfly and a cloud.”