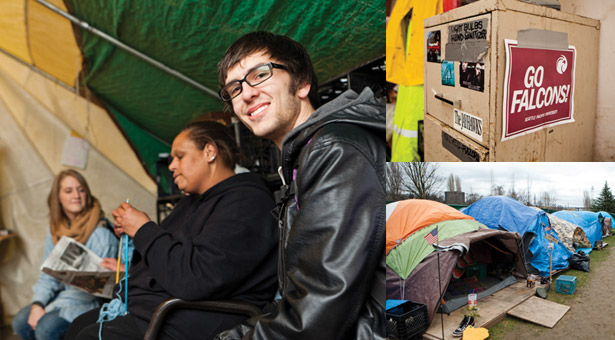 After almost a week of snow, Tracy Arant was expecting her worst Tent City move yet. She’d been
living in the Seattle-based homeless community for about six months and dreaded moving days,
when the camp relocates every few months. This time, tents and wooden pallets had to be chipped
out from the snow. Plywood, blankets, and personal items were wet and heavy, and the field at Seattle Pacific University was filled with mud and slush.

“I thought it was going to be this side of hell,” she remembers.

So when her moving truck pulled up to campus around 9 a.m. on Saturday, January 21, she was stunned to see more than 125 raincoat-clad Seattle Pacific University students. She turned to the camp advisor, Roger Franz, and said, “Are they here for us?”

“I do believe so,” he replied.

The Tent City residents usually have a few helpers, but nothing like 125. “It was impossible to get an attitude,” Arant says, crediting the students who laughed and joked with the residents while working.

For nine weeks this winter (January 21–March 24, 2012), Tent City 3 made its home on Seattle Pacific’s Wallace Field. Students first approached President Eaton with the idea more than two years ago. After several site visits and work behind the scenes, SPU announced their stay in November 2011. While some of the initial feedback was negative, Jeff Jordan, vice president
for student life, says he did not receive any negative feedback once Tent City arrived. Instead,
he enjoyed seeing relationships develop between students and Tent City residents, and stereotypes
be broken on both sides.

Hosting and learning from Tent City was a natural fit for SPU, he says. “Our heritage was founded on reaching into the world, and this was an opportunity to invite that worldwide community into our front yard.”

Tent City 3 is a self-governed community of up to 100 homeless individuals. Since Seattle doesn’t
have enough affordable housing, Tent City serves as a place for people to transition out of homelessness and get back on their feet. The community has 24/7 security and its own toilets and
showers, and several residents have jobs. It also has a long list of rules, which includes no alcohol,
no spitting, and no slamming port-a-potty doors.

“We’re like a big family,” says Shawn Brigham, a resident who lost his job due to injury after a forklift accident four years ago. Brigham felt uncomfortable being at SPU at first. He’d never seen so many people come down to take a tour or to visit. “I almost felt like we were being put on display,” he recalls.

But it didn’t take long for him to appreciate the benefits of being on a college campus.

Almost every day, the residents could participate in an on-campus activity. There were foot-care clinics, a knitting/crocheting club, a book club, a yoga class, Falcon basketball games, and more. Plus, a campus or community group served them a hot meal every night, which doesn’t happen at every site.

Senior and sociology major Alex Mikulas was on the committee that helped organize the meal schedule. But he said his most meaningful experience with Tent City came by compiling life history interviews for Assistant Professor of Sociology Karen Snedker. (Snedker is conducting a study on attitudes toward the homeless.) Mikulas was surprised at how much residents told him. “Sometimes you don’t even want to hear the words coming out of their mouth because it’s so rough,” he says.

Over and over again, Mikulas heard stories of broken relationships: death, abuse, bridges burned, and family members lost. It made him think differently about how people get into homelessness. He heard a story of a 16-year-old whose father suddenly died and who had no contact with his mother. And he also heard stories of people being injured on the job and having to choose between paying for rent or for health care.

“It’s been really humbling to hear people’s stories because when you hear those stories, you understand that they’re the same as you are,” he says.

During the stay, faculty and staff members hosted weekly educational forums on issues related to homelessness. At one of the first forums, Arant spoke about what it’s like to be a homeless woman. Students asked her all sorts of questions, including how she found places to go to the bathroom. At the end of the forum, a student came up to Arant, told her she had made a difference, and started to cry.

“Don’t cry for me,” Arant said. “Cry for the ones who are out there. We’ve got a community.” But she admits that she won’t forget those tears.

“To see somebody hurt because I was homeless really touched me,” she says. “Whenever I see faculty, I tell them, ‘You need to be proud of your student body.’ The students here are fantastic.”

Learn about homelessness: During the weeks of Tent City 3’s stay on SPU’s campus, weekly
forums on topics related to homelessness, such as “Growing up Homeless” or “The Gospel and
Homelessness.” Watch video of these forums at spu.edu/itunes.