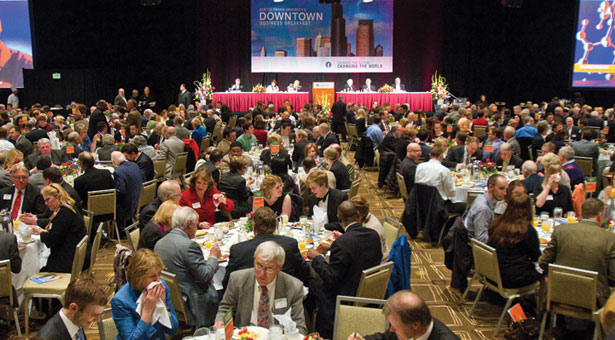 “We have to understand the dependency of our virtues. We tend to think our vices are somebody else’s fault, and our virtues are stuff we’ve created,” David Brooks said, in his address, “The Humility Code,” at SPU’s Downtown Business Breakfast.

“This Business Breakfast has been one of the delights of my 17 years at Seattle Pacific,” Eaton says. “When we began these breakfast events so many years ago, my hope was to bring some of the great voices of our day to speak about things that matter — science, education, politics, faith, character, culture, and more — and that these conversations would guide and enhance our work in this  remarkable city of Seattle.”

At 7 a.m. on April 11, 2012, Seattle Pacific welcomed nearly 1,100 local business and community
leaders to the Westin Seattle to hear David Brooks, one of America’s most acclaimed cultural and political commentators.

Brooks writes a biweekly op-ed column for The New York Times and is a regular analyst on PBS NewsHour and NPR’s All Things Considered. Over the past 17 years, Brooks’ commentary has frequently found it’s way into President Eaton’s speaking and writing.

He challenged the audience to think about how to be involved in public life and community in a
way that serves others. This was the second time Brooks provided the keynote address at a Business Breakfast; he also spoke in 2004.

“Dr. Eaton has made this institution a leader — perhaps the nation’s leader — in self consciously thinking about not only career hoops that students have to jump through to get through life, but also to think about character and the deeper issues that students need to be equipped with,” Brooks said, in his address. Following the breakfast, Brooks also gave a public lecture in Seattle Pacific’s Upper Gwinn Commons.

Read his interview with Response in its entirety at A Conversation With David Brooks.