From recitals to concerts to class projects, students and faculty have a variety of performances for you to hear on iTunes. 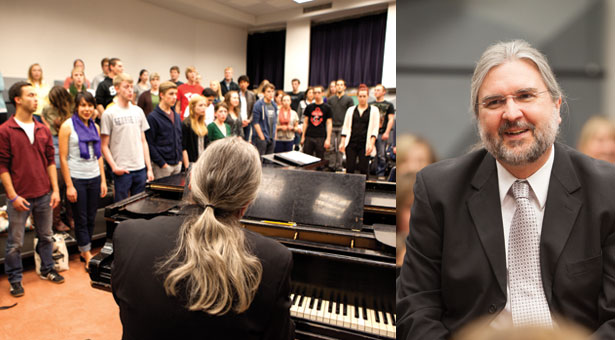 His students, says SPU Assistant Professor of Choral Music David Anderson (right), help him combat the frustrations of a stroke: “Other than my family, there's no one I'd rather be in the room with than the choir.”

The morning of July 20, 2011, was a promising one. Seattle Pacific University choral director David Anderson made ready to go to Tacoma, Washington, for the summer session of the state chapter of the American Choral Directors Association.

He still doesn't know if he arrived in Tacoma. Someone reported his car driving on the wrong side of the street in Seattle. The next thing he knew, the police asked if he remembered the accident. Only partially conscious, he had driven off the road.

After six days at Harborview Trauma Center and a week of rehab, it was uncertain if the beloved music man's 30-year teaching career was over. He adds that there was “no smoking gun,” nothing he could have done to prevent the stroke. It was, says his neurologist, a random incident that left him with no sense of touch in his left fingers and foot. He also suffered severe left side vision loss. Legally, he could no longer drive. Mentally, he wasn't through by a mile.

He did take a term off, but by the time Winter Quarter 2012 came around, he was through with down time and isolation.

“Compared to most folks in rehab, I was at the top of the class,” says Anderson, an assistant
professor of choral music.

Now to read music, he enlarges the scores, and uses colored pens as aids to recognition.

The biggest help in his recovery, however, are his choral students themselves, who affectionately call Anderson “Doc.” When they heard of the stroke, they rallied for his recovery. Emails of support began to circulate. Experienced choir members told the beginning freshmen stories of the great man now absent. When he was unable to hold the traditional choir retreat the first Saturday of Autumn Quarter 2011, they organized their own. And they gave adjunct music faculty and substitute directors Ron Haight and Wendy Moy their full attention.

“We all wanted him to be able to return to excellent choirs ready to work,” says senior  communication major Katie Caday, a member of Concert Choir, Chamber Singers, and the SPU Gospel Choir. “Always, at the end of what has to be an exhausting rehearsal, he thanks us for being there.”

“I'm in awe of Doc's perseverance and humility as he relearns and problem solves,” adds senior
educational ministry major Becky Jo Tuell, who has been in Concert Choir for four years.

“You have to either hang it up or make the best of it,” Anderson says. “My students are fabulous, so
supportive and patient. If someone on the left side of the room raises a hand, I don't see it. We joke about it, and I let them know they don't have to worry about offending me. Things happen in life, and not always for the good.”

Students, he is quick to point out, are an antidote to depression. “Getting up in the morning and knowing I get to see them and work with them is the greatest thing.”

Four months after the stroke, Anderson attended the first night of The Sacred Sounds of Christmas concert at Benaroya Hall. Though others took his usual place at the conductor's podium, he came in proud support of his students. As it turned out, it was just the beginning of his joy. Before the
night ended, Anderson learned that he had become a grandfather for the first time.