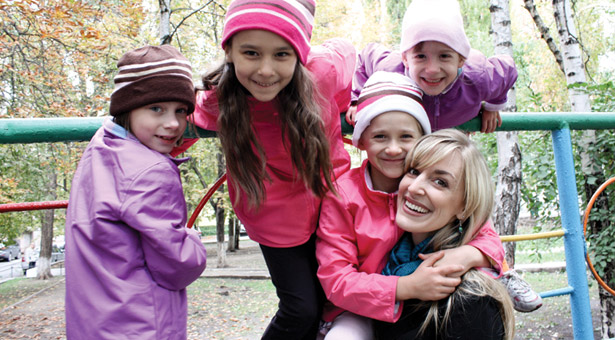 Karen Springs (right) played at a park with these four girls in Kiev, Ukraine, while they were awaiting their U.S. visas. All four girls were adopted by the same U.S. family.

It’s been a year and three months since Karen Springs opened her two-room apartment in Kiev,
Ukraine, to host adoptive families from the United States. Since then, 34 families have passed
through, resulting in the adoption of 43 children.

“I am overwhelmed by the goodness of God this past year,” Spring writes on her blog Hospitality in Kiev.

Her self-started ministry, Hospitality House, eliminates the financial burden of lodging for  adoptive families who are attending their two-day appointment with the State Department on Adoption, Ukraine’s adoption authority.

Springs had only just graduated from Seattle Pacific University in 2004 when she decided to move to Ukraine with relatives, with no specific plan in mind. About a month after arriving, Springs visited an orphanage in southern Ukraine, where, she spent time with 12-year-old girls, the age most are no longer considered for adoption. About 60,000 children live in orphanages in Ukraine; about 30,000 of them are eligible for adoption.

She’s now been working with orphans in Ukraine for seven years. In addition to Hospitality House, which she started as a side project, Springs works for Orphan’s Promise, a project of the Christian Broadcasting Network. There, she oversees administrative duties and acts as summer camp director, teaching various English and improv drama workshops.

Springs’ team has translated four books that are resources for adoptive parents from English to
Russian, for use in several former Soviet countries.

“Christian families in Ukraine don’t have many resources on the process of adoption,” Springs
explains, “especially dealing with the emotional and psychological toll of the kids’ experiences.”

While her day-to-day job at Orphan’s Promise mainly focuses on adoption of orphans by local families, her U.S. citizenship offers a unique opportunity for her to promote international
adoption. This prompted not only the beginning of Hospitality House, but also the start of threeweek summer trips to the U.S.

In July 2011, Springs partnered with Window to Hope, an organization started by her home church, Northshore Baptist Church in Bothell, Washington. Together they coordinated
stays for 13 orphans with host families.

“The phrase ‘bringing work home’ never meant something to me until now,” Springs says.
Through these trips approximately 15 children have been adopted. And Springs will be
bringing eight children to the U.S. in July and August 2012 for another visit — a homestay that
could turn into a new home.