Holiness and the Psalms 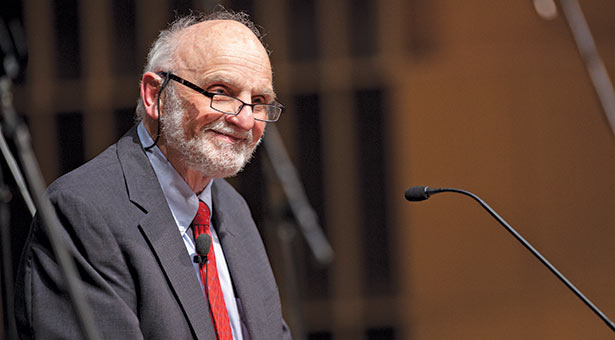 “I think anytime different Christian traditions come in contact with each other, they impact each other,” says theologian Walter Brueggemann. “We have gifts to give each other.”.

For three days during Spring Break, Seattle Pacific University’s campus played host to more than 500 theologians, church leaders, and laypeople. The occasion was the fourth-ever joint meeting of Wesleyan Theological Society and Society for Pentecostal Studies.

Every five years, the two societies hold their annual meetings together on a Christian college or university campus, focusing on a common theme. During March 21–23, 2013, the campus was Seattle Pacific and the theme was “holiness.” Attendees came from across the U.S., as well as from the U.K., Canada, South Africa, and Japan.

The agenda included worship services, 105 breakout sessions led by SPU and visiting theologians, working breakfasts, lunch colloquia, and dinner banquets. Then there was the Wesleyan Holiness Special Collection exhibit in the SPU Library prepared in honor of the gathering.

But by far the biggest draw was a keynote address by Walter Brueggemann — one of the world’s foremost Old Testament theologians and author of more than 60 books. Brueggemann spoke in First Free Methodist Church to a standing-room-only crowd on “The Alternative World of the Psalms.”

Why the Psalms? “With the possible exception of Mennonites,” he explains, “nobody sings as well as Wesleyans and Pentecostals, and the closest I could get to that was the book of Psalms.” Besides, he has written no fewer than eight books on the Psalms.

Brueggemann began his address with seven characteristics of our “closely held world”: anxiety, greed, self-sufficiency, denial, despair, amnesia, and “normlessness” — or an “anything goes” approach to life.

Then he listed seven characteristics of the “alternative” world mediated by the Psalms: a world of assurance, abundance, ultimate dependence on God, “abrasive truth-telling,” hope, “lively remembering,” and what he calls “normed fidelity,” or a call to obedience to God’s Torah.

Finally, Brueggemann explained what the Psalms reveal about God’s character: God is a God of abundance; who prepares a table for us in the presence of our enemies; who is trustworthy; who tells the truth; who keeps his promises; whose mighty deeds we are called to remember; and whose law is “an easy burden and a light yoke.”

What the Psalter gives us, says Brueggemann, is “a world occupied by God.”

“The work of the Psalter is to populate our world with this character who transforms,” he said. When we allow ourselves to enter the counter-world of the Psalms, we experience “buoyancy and risk, and are characteristically lost in wonder, love, and praise.”

“Walter Brueggemann has a way of making the Old Testament come alive for the world today,” says SPU Assistant Professor of Biblical Studies Sara Koenig. “After listening to him, it’s hard not to be aware of the relevance of these ancient Psalms for our contemporary life.”