You are invited to hear faculty and other campus authors read and discuss their latest work at the SPU Library's Thursday Food For Thought reading series. All readings are free and open to the public. See a schedule of readings. 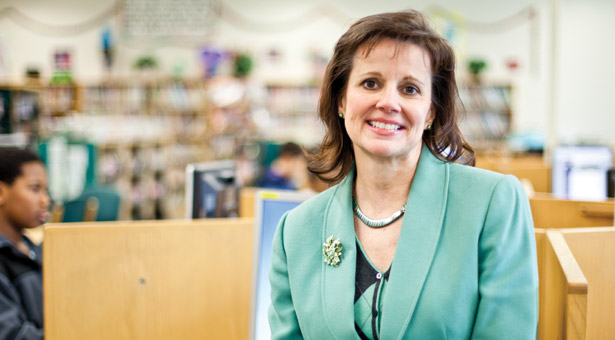 Today's parents — including Barack and Michelle Obama — are rightly concerned about the state of education in America. Out of 30 comparable countries, the United States ranks near the bottom in subjects such as math (the U.S. is 25) and science (the U.S. is 21). Six years ago, the Renton (Washington) School District wasn't bucking the trend.

Renton's schools included 14,500 students, had a 74.9 percent high school graduation rate and a 50 percent poverty rate, and students and their parents spoke 87 languages. Enough to make an educator gulp? Not Mary Alice Heuschel.

When Heuschel took the helm in Renton, Washington Assessment of Student Learning scores varied wildly from school to school, and the district had been unable to fill open math positions at three high schools with teachers who had degrees or endorsements in mathematics. Science textbooks were outdated, and fifth graders were learning fourth-grade math skills. "We developed a strategic plan," says Heuschel. "We eliminated the 'blame game' and focused on research-proven methods available to address issues."

Heuschel and her team identified — and addressed — the risk factors contributing to student failure and dropouts. "We found that failing a class in middle school or ninth grade, unexcused absences, and interruptions in attendance all increased the chance of dropping out by 80 percent," she explains. So her team turned everyone in the district into dropout watchdogs, "from preschool parents to teachers," she says.

Now, six years later, the school district has updated its curricula from preschool to 12th grade. More than 70 teachers with math endorsements fill the schools, and Renton School District has an impressive 93 percent graduation rate (the national rate hovers at 70 percent).

Significant changes included an "endorsement academy" for teachers, immediate academic support for students at risk for dropping out, and a new vision statement for the district: Provide high-quality instruction and learning for every child, every day in every classroom and environment. Heuschel also built partnerships with the community and businesses through a fundraising arm: Friends of Renton Schools.

Long before she became RSD superintendent, Heuschel had focused on classroom improvement. During the 1980s, she taught students in the Department of Defense schools in Nuremberg, Germany, and coordinated the regional school-improvement efforts. Between 1999 and 2006, she served in Olympia, Washington, as assistant state superintendent and then deputy state superintendent. "I feel really blessed to have had that experience at state and federal levels, to understand policy, research, and best practices for implementation," she says.

Rick Eigenbrood, dean of the SPU School of Education, has followed Heuschel's efforts in Renton. He's not surprised at her success. "Many other programs do not focus on statistics or research to the same extent that Seattle Pacific does," Eigenbrood explains. "While some superintendents focus on the business of education, others focus on research and implementation of effective learning strategies. Mary Alice definitely falls at that end of the continuum."

Heuschel visits 10–20 classrooms every week to see learning strategies in action. To support teachers, she says, "I must understand the challenges and opportunities they face on a daily basis."

Likewise, to send the message that academic success is tied to extracurricular activities that engage students in learning, each year she attends sports competitions — football, basketball, track and field, gymnastics, wrestling — at least once per sport for each of the three Renton high schools. She attends the choir, band, orchestra, drama, and talent shows of the elementary, middle, and high schools, too. "This isn't a job," she laughs. "This is a lifestyle."