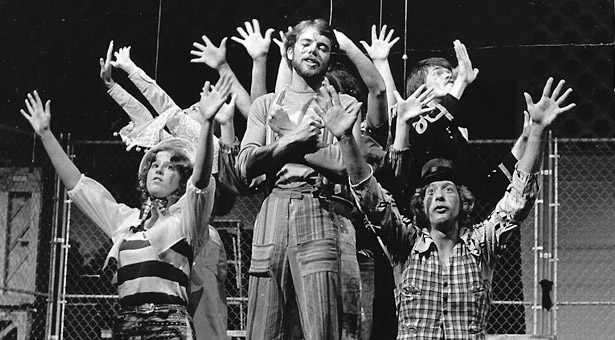 The musical Godspell has special significance for SPU because its Northwest premiere occurred in 1974 on the Seattle Pacific College stage (pictured here). Associate Professor of Theatre Andrew Ryder directed SPU's 2011 production of Godspell.

Some of the 150 alumni, students, parents, and friends who gathered to celebrate a half century of theatre at Seattle Pacific University didn't want to go home. They lingered after the Homecoming reception was over, reminiscing about favorite moments on stage, and sharing more than a little pride in the accomplishments of the Theatre Department over 50 years.

"Theatre alums have a strong connection because we did more than take classes together; we got to be part of some amazing productions," says Danny Walter '93. "It was wonderful to see so many professors and alums I had learned from and worked alongside to make those plays come together."

That sense of history and camaraderie has permeated the entire 50th Year. "This is SPU Theatre's jubilee season," says Don Yanik, professor of theatre, whose department is marking the occasion by producing some of America's most enduring plays, including Our Town, The Fantasticks, and Godspell. Walter was a cast member of the 1993 Seattle Pacific staging of Godspell.

But Seattle Pacific College President C. Dorr Demaray and a young theatre professor, James Chapman, begged to differ. "Theatre captured the deepest longings and understanding of the human condition," says Kim Gilnett, SPU marketing associate for fine arts. And it did so in community with actors, technicians, and audience, providing a place of grace that extended beyond the footlights.

So Demaray encouraged Chapman in his vision to create a program that was not only academically sound, but also took advantage of Seattle's growing professional theatre network.

"We have had students and alumni working in every major theatre company in the city," says Yanik, a well-known set designer whose work has enhanced Seattle's professional stages and most of SPU's 263-plus productions. An increasing number of theatre graduates are attending graduate school as well.

"The thousands of students who have worked on our productions over the years have come from every discipline," Yanik also notes. "Many have gone on to use their gifts in Christian mission."

Chapman, who retired from SPU in 2000 after 39 years in the classroom, died in 2002. At the Homecoming reception, current students who had never met the founder of Seattle Pacific theatre were introduced to his legacy through a video produced by students he had influenced.

Today's theatre program builds on that legacy, says Professor of Theatre George Scranton, who has taught at SPU since the early days of the program. "We are doing the work that we are called to do," he says. "We try to tell the truth, in love and through art."