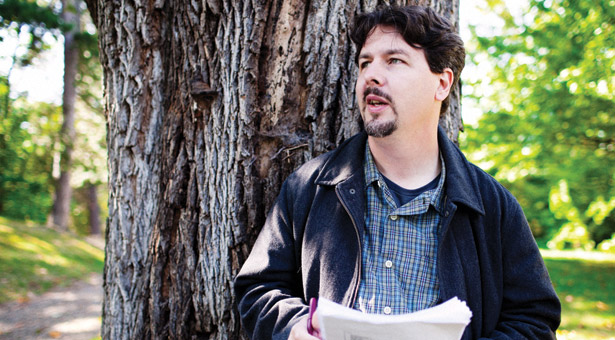 After months of surviving in the wilderness, the refugees of the ruined House Abascar are finally free to leave the caves that have been their shelter and set off together to build a new city.

And so, by extension, is their creator, fantasy novelist and Response Contributing Editor Jeffrey Overstreet '94.

While he was writing Cyndere's Midnight and Raven's Ladder, the second and third books in his series of four fantasy novels, he says, "I felt like I'd been living in caves for a couple of years."

The difference in writing the newest book, The Ale Boy's Feast, he found refreshing.

"Writing about characters in a wonderland of forests, mountains, and colorful rivers was very therapeutic," he says, "since I spend most of my day in front of a computer screen and in traffic."

From first imagining a version of the stories on a hike with his wife, Anne, to finishing up the last revisions this winter, Overstreet has been living with the series for nearly 15 years. 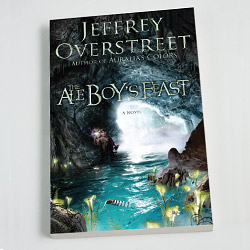 The Ale Boy's Feast will be released in March 2011, the final installment in The Auralia Thread, a series of four interwoven novels beginning with Auralia's Colors, the tale of a girl who inspired a kingdom with a special kind of artistic vision. The four books trace the effect Auralia's vision has on the people — from wild beastmen to orphans to powerful heiresses — who encounter her mysterious colors.

What characters discover is that this art has the power to create or destroy, depending on how it's used. The power and beauty of nature and of art can be misused by corrupt leaders. Yet those leaders cannot control Auralia's colors, which, like the novels themselves, bear witness to the redemptive power of art and of natural revelation.

"Fairy tales give shape to our spiritual longing; they are a glimpse of what's beyond our own experience," Overstreet says.

As a Christian and a fantasy writer influenced by C.S. Lewis and J.R.R. Tolkien, among others, Overstreet sometimes gets labeled as a "Christian fantasy writer," rather than a "fantasy writer who happens to be Christian." This leads some readers to assume that the novels are about tidy moral lessons or biblical allegory.

"That's where the fourth book is going to be really frustrating for them," he says. "These heroes and monsters are wrestling with questions about creativity, nature, love, mystery, and faith, for sure. But they don't arrive at easy answers."

After immersing himself for so long in the beautiful but often dire world of Auralia and her misfits, he's ready to inhabit a somewhat lighter world. His newest work-in-progress, a children's book, is about a young bird who learns to fly despite the low expectations of his flightless kind and runs away to the big city.

But first, after nearly five years of writing every evening and weekend? Rest.