Alumni and Families Gain "A Sense of Place" 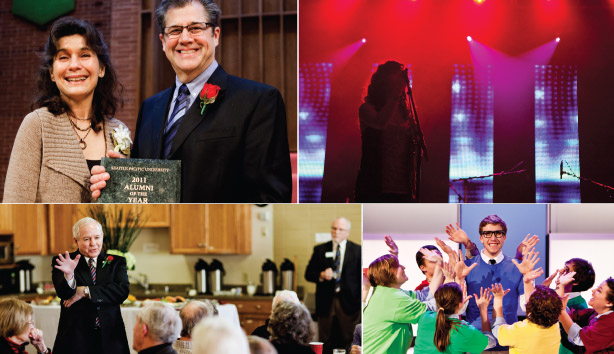 From top left, clockwise: Scott Nolte '76 and Pam Bailey Nolte '76 received the 2011 Alumni of the Year award for 34 years of excellence in the Seattle theatre community. The Student Talent Show drew hundreds to Brougham Pavilion to cheer their favorite acts. President Philip Eaton connects with The Founders reunion, the 50-year celebration of the Class of 1961. The Godspell cast sang "We Beseech Thee" before sellout crowds.

In January, Homecoming and Family Weekend 2011 drew hundreds of alumni and families of students to Seattle Pacific University for three days and dozens of events, including class reunions, Falcon basketball, theatre performances, and recognition ceremonies.

A grandfather flew from Virginia to check on his investment in his grandson's education. A theatre graduate drove from Oregon to honor the 50th season of theatre at Seattle Pacific. "It was incredible," says Kenneth Cornell, director of alumni and parent relations. "We had folks come from coast to coast and internationally."

Two marquee events had a surge in attendance. A large crowd gathered for the Alumni Awards Luncheon to honor Alumni of the Year Scott Nolte '76 and Pamela Bailey Nolte '76, co-founders of Taproot Theatre Company. Also saluted were Medallion Award recipients Jerry Brown '75, a pioneer in the financial planning industry; Anita Marson Deyneka '66, a former president of Russian Ministries with 40 years of service in international mission; and Ruth Terpsma Hill '72, executive minister of Women Ministries of the Evangelical Covenant Church. All honorees spoke about significant places on the SPU campus where their lives had been changed.

SPU President Philip Eaton addressed a near-sellout audience at the President's Luncheon, where he spoke on "Christians in Exile — And a Vibrant Vision for the Christian University."