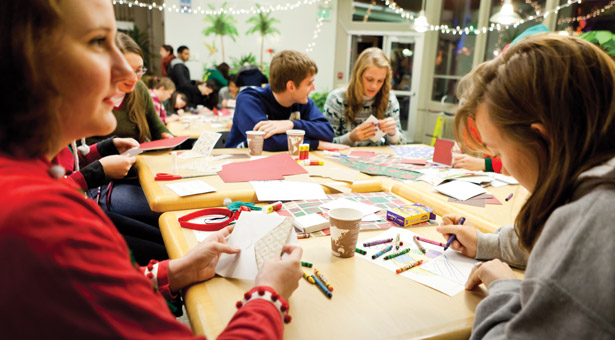 The stockings may have all been hung by the chimney with care, but on December 3, 2010, students flocked to area thrift stores in search of the loudest Christmas sweaters and Grinch-like attire they could find. It was the 25th anniversary of "Tradition," the holiday transformation of Tiffany Loop into something like an overturned toy box.

"We've had up to 200 young alumni come to campus for Tradition each year," says Young Alumni Council advisor Laila Sharpe '73. This year, it took two Santas to accommodate all the Seattle Pacific University and Queen Anne community members wanting photos with the jolly old elves. Peek behind the beards and you would have found former ASSP presidents Chris Sharpe '06 and Joel VanderHoek '09. 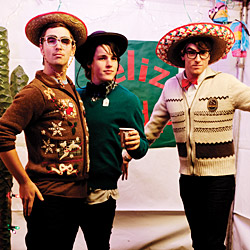 Beneath a giant "tree" of strung white lights, visitors found a live nativity, live music, and storybooks read aloud from a variety of global traditions as part of an international theme. Tiffany Loop's stately elms were bathed in colored spotlights. In the nearby Science Building lounge, Young Alumni Council members served hot beverages and welcoming conversation.

"We wanted to be a blessing to the University and to the Seattle community," says sophomore Alyssa Sutherland, a Student Union Board coordinator of the event. "Last year, when I was a freshman, Tradition was the first time I felt like I truly belonged at SPU."

Dale Anderson '87, director of student programs at SPU, was a junior in 1986 when he thought that what the University needed was a neighborhood event around the Christmas tree. Though the early trees trucked in and decorated for the occasion often blew over in the wind, the Victory Quartet, carols, and hot cider were a hit.

"I was harassed by some faculty members for calling it 'Tradition' the first year," says Dale. "But I wanted it to become an annual tradition from the start." He got his wish.