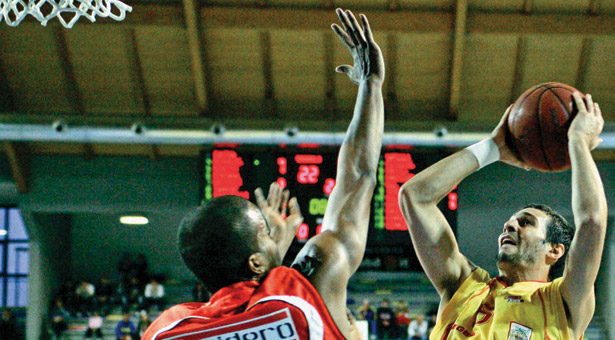 It's hard to know where sports will take you. For instance, basketball has taken Tony Binetti '06 and Jenny Poe Binetti '05 to Veroli, Italy, a hilltop town about 45 minutes from Rome.

Tony Binetti began his first season with Basket Veroli, a team in Italy's second-highest pro division, LegADue, last fall. But he's no stranger to Italian basketball — or changing uniforms. Since heading to Europe after graduating from Seattle Pacific University in 2006 with a degree in business finance/economics, he now will have been with eight teams altogether, seven of those in Italy. (The exception was one year in Spain.)

While that has meant a certain amount of moving around, Binetti has relished the continued opportunity to play his favorite game.

"Everyone who is really serious about basketball and loves the game wants to keep playing after college," he says. "I've been pretty blessed to actually do it and sustain it."

Binetti's time with the Falcons helped set up his chance to make it as a pro. During his four years in maroon, he played in 114 of SPU's 115 games, and from his sophomore through his senior year, he started 85 of 86 games. A 6-foot-1 guard, his scoring average rose from 4.0 as a freshman to a team-leading 18.2 as a senior. The 162 assists he dished out as a senior tied for the fifth-best single- season total in school history, and his 459 career assists also ranks No. 5 on Seattle Pacific's all-time list. Then, following his senior season in 2006, Binetti was on two first-team All-American and All-District squads, and was the GNAC's Player of the Year, as he led the Falcons to a 14–4 conference record and the title.

That year, Seattle Pacific swept through three NCAA West Region games in Brougham Pavilion in March 2006, then won its Elite Eight opener, 79–65 against Montevallo in Springfield, Massachusetts, before seeing its 26–6 season end in the semifinals with a 68–63 loss to Virginia Union.

"Having the success that we had at SPU and developing as a person and as a player has contributed to my success now," Binetti says.

While Binetti certainly would have enjoyed a shot at the NBA, he has found the European pro competition to be very close.

At Veroli, Binetti finds himself playing for a former rival. He signed with Veroli shortly after helping beat them, as his former team Banco di Sardegna Sassari won a best-of-five final series. In his role as the sixth man, Binetti was a key contributor as Sassari split the first two games on the road (losing the first, 95-82, but winning the second, 90–88), then swept the next two at home, 86–79 and 99–78.

"Winning the league was a pretty crazy experience and pretty surreal," says Binetti. "That's the first time I've won it. After we won, people were partying in the streets until 5 or 6 in the morning."

This year, Binetti's — and Veroli's — season has been a bit "up and down," he says. "I have been fighting some nagging injuries but am feeling better," he adds. "It's been a struggle at times but we are playing well at the moment."

For the Binettis, basketball is something of a family affair. Jenny also played for SPU, on a team that made it to the NCAA Division II championship game in 2005. She currently practices with a women's basketball team in the nearby city of Ferentino.

"Sometimes she shoots around after my practice, and my teammates always joke with me that she has a better jumper than I do," says Tony. "The sad thing for me is it might be true."

The Binettis, who have been married for two years, have had a chance to see a good portion of both Italy and Spain. While Europe's transportation system makes it relatively easy to get around, Binetti also has had to learn to navigate the roads. As for the stories about how challenging it is to drive in Europe?

"You just have to be as aggressive as they are, and you'll be OK," he says with a laugh.

Binetti figures he has plenty of basketball left in him, and will keep playing as long as the right opportunities to do so keep presenting themselves. Whenever that times come to step away, he'll have options.