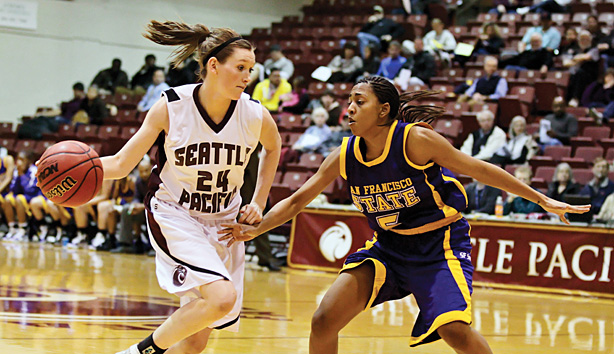 Senior guard Maddie Maloney was named a GNAC Player of the Week in February 2010. She has the GNAC's third-best assist-turnover ratio at 1.6 and ranks No. 2 in steals for the conference.

The Falcon volleyball team hit a high note with a record-breaking season this autumn and a Sweet 16 appearance (see p. 11). Autumn and winter teams posted substantial successes, even as regional competitions heat up.

Women's Soccer
The ninth-ranked, conference-winning Falcon squad made a Sweet 16 appearance in November 2010 in Austin, Texas, where they fell 1–0 to familiar playoff foe UC San Diego. This rounded out their season for a 16–2–2 record.

Men's Soccer
Coach Mark Collings led the team to a second-place finish in the Great Northwest Athletic Conference, with a 7–2–1 record in the conference and a 10–6–2 record overall.

Cross Country
Both the men's and women's teams earned a 12th-place finish, running through snow at the NCAA West Regionals in Bellingham, Washington, on November 20, 2010. Freshman Allison Cutting led the pack for the women and was a top-20 finisher.

Women's Basketball
The Falcons (No. 7 seed) headed to Pomona, California, for the NCAA West Regional tournament and played against Grand Canyon (No. 2 seed). They held a 20–8 record after the GNAC Tournament.

Men's Basketball
The men's team (19–9) faced off against Central Washington at the NCAA West Regional tournament in Ellensburg, Washington. The team marked the 1,000th victory of its 68-year history with a win over Western Washington on January 26, 2011.

Gymnastics
By the end of February 2011, Coach Laurel Tindall's team had five consecutive meets with a team score over 190 points, putting it in good position for regional and national competitions in March and April.