Students and Alums Fight Slavery Worldwide and Close to Home 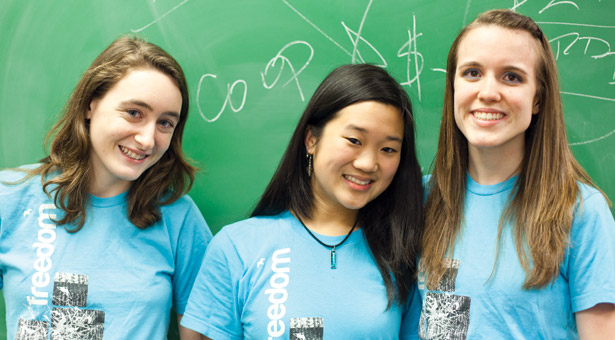 Left to right: SPU students Danielle Myers, Melanie Ukosakul, and Brittney Fortune are members of The Abolition, a club that advocates against slavery and human trafficking.

Growing up in Thailand, Melanie Ukosakul was aware of her country's reputation as a place where poor immigrants and ethnic minorities are coerced into working as modern slaves, laboring in factories or selling their bodies to foreign tourists.

But Ukosakul, now a senior majoring in psychology at Seattle Pacific University, says she thought of the practice as something that only existed in places such as Southeast Asia.

Then in the fall of 2007 she attended an on-campus presentation by the San Francisco-based Not For Sale campaign (notforsalecampaign.org). Ukosakul discovered that there are hundreds of brothels, farms, and factories all over the world, even in Seattle, where people work grueling hours, in captivity, for little or no pay. "It could be next door," she says. "It looks like so many different things, whether it's household labor, salons — I think I just read an article about a donut shop. There are so many fronts for human trafficking."

The U.S. State Department estimates that there are at least 12.3 million adults and children enslaved through forced labor, bonded labor, and forced prostitution around the world. A Washington state task force found that because of Seattle's ports, access to major freeways, and proximity to the border, the city SPU calls home is a prime location for the buying and selling of people. Last September, federal officials arrested the executives of a California-based company, Global Horizons, accused of luring at least 200 Thai workers into virtual slavery on central Washington farms.

"It is so close to home — that's shocking," Ukosakul says. "It's shocking and it's overwhelming."

By 2008, Ukosakul and other students had formed The Abolition, a club that holds events to raise awareness among SPU students about the existence of modern slavery and raises funds to support efforts to combat it. Ukosakul currently serves as The Abolition's president.

Krista Haxton '09, a former member of The Abolition, has taken the fight to stop human exploitation out into the city of Seattle.

While still a student, Haxton, who now works in campus housing, began meeting with students from other area colleges and universities. "We all sat down one day at a coffee shop and realized we wanted to do more than just sit in seminars."

They called themselves the Freedom Initiative and in the spring of 2009 put on a city-focused conference at University Presbyterian Church called "Unbound." "We wanted people of the city to learn about trafficking in their city," Haxton says.

Unbound 2009 boasted about 300 participants representing government agencies, businesses, and nonprofits. It spawned Seattle Against Slavery — a local coalition that includes student groups such as The Abolition, service providers, and the Seattle Police Department. Seattle Against Slavery recently began a poster campaign to point victims of trafficking toward resources for help getting out.

The students and alums working in Seattle have an ally in another SPU graduate who is taking the issue national. Kevin Austin '84 is an ordained Free Methodist minister who went to Thailand as a missionary. There he would see men coming to the country to buy sex from women forced into prostitution. "It disturbed my conscience," he says.

When he returned to the U.S., Austin took his concerns to the Free Methodist Church. At its 2007 General Assembly, the denomination unanimously approved a resolution opposing human trafficking in all its forms.

The church also created a mission position for Austin in the United States targeted at modern slavery. Working with the Not For Sale campaign, he now reaches out to people of all faiths to organize efforts to combat worldwide human trafficking. "There's a lot that we can argue about and disagree about, but virtually everybody can agree that slavery is evil," Austin says.