The Family of God in a Post-Racial World 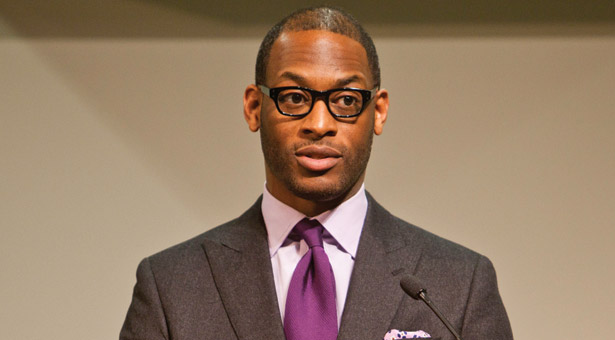 At the 2011 Palmer Lecture, J. Kameron Carter spoke to a standing-room-only crowd in Upper Gwinn about the church's core task: to witness to the love of God for the entire world.

When Jesus was asked the question, "Who is my neighbor?" he told the parable of the Good Samaritan (Luke 10). Yet what does it mean to love our neighbors if we don't understand or respect their cultures?

This is the question considered by theologian J. Kameron Carter in the 34th annual Alfred S. Palmer Lecture, hosted by Seattle Pacific University's School of Theology on January 27, 2011. Carter, associate professor of theology and black church studies at Duke Divinity School, and author of Race: A Theological Account, spoke on "Matthew's Melancholy, or The Scriptural Economy of Post-Racial Identity According to Matthew Arnold."

Taking as his texts Arnold's poem "Dover Beach," Arnold's collection of essays Culture and Anarchy, and Daniel Defoe's poem "The True Born Englishman," Carter spoke of the meaning of "race" in a "post-racial" world. It is "a world of racism without races," where, he explained, racism happens less between individuals than between cultures. He examined how Christianity "gets melded to a kind of Western sensibility and establishes the normal." In this way, Christianity can sometimes be complicit with racist cultural norms, rather than rejecting them.

We counteract this "normalizing Christianity" by the witness of Jesus in the world, said Carter. He explained that in the parable of the Good Samaritan, we should see ourselves not as the one showing mercy, but as the one in the ditch, accepting help from someone outside our own culture. "It's a different kind of missionary orientation — an orientation rooted in the blessings that are resident in those that I'm meeting — because God has already reached them, even before I showed up," Carter said.

How we can improve our Christianity is not the right question, said Carter. "We need to take that question off the table and press the other question: What does it mean to follow the God who has embraced the world in Jesus Christ?"

That morning, Carter also explored what it means to follow Jesus in his Chapel speech, "Disruptive Redemption." He examined Jesus' call in Matthew 4:17: "Repent, for the kingdom of heaven has come near." This repentance, Carter said, does not merely mean we must change our behavior. Instead, when Jesus calls us to follow him, we are being "reoriented" into a new family of belonging.

"Jesus is telling us we are now woven inside a new structure of kith and kin, inside new bonds of who we take our people to be," he said. The good news, he explained, is that "we now belong to God."

An annual event at SPU since 1978, the Palmer Lecture Series "seeks to bring the best minds and hearts in Wesleyan theology and biblical studies to campus to discuss the Christian faith from a Wesleyan perspective." The lectureship is held in honor of Alfred Palmer, a pastoral leader in Western Washington for more than half a century.

"Carter's lecture comes as the School of Theology graduate program is beginning," Bantum says. "This represents a wonderful opportunity to reflect more deeply about what it means to help pastors to think critically and prayerfully about the world and people they will serve. For me personally, Carter has been a dear friend whose passion and enthusiasm for theology is truly infectious."

Listen to Carter’s lectures at spu.edu/itunes.