Your Memories of Alexander Hall 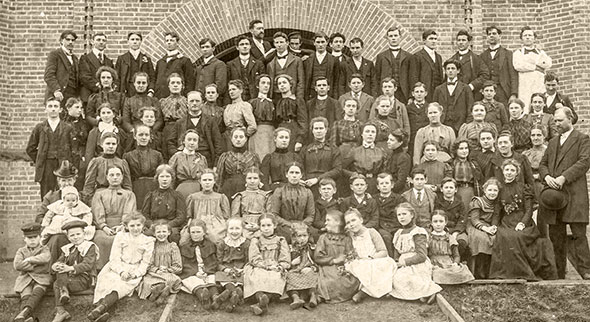 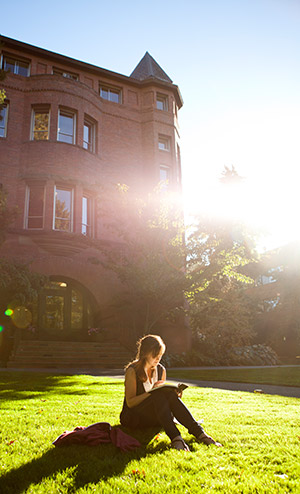 For today’s students and faculty, it is the home of academic programs in theology and the social sciences.

For alumni, it is their former residence hall, the place where they learned from faculty mentors, or the home of Alexander Chapel.

For Seattle residents, Alexander Hall is the iconic structure they associate with SPU’s campus.

For the larger Pacific Northwest community, the building is a regional historic treasure.

“During the earthquake of 1965, I remember watching the building sway and seeing a chimney come down.”

From SPU to Notre Dame

“Dr. Harris’ office was in Alexander Hall. He was my faculty adviser in my senior year, and I was trying to decide whether to go on to graduate school. He asked if I could go to any graduate school in the country where would I go? I said the University of Notre Dame in South Bend, Indiana. He said, Then apply." I did, and I was accepted and won a Graduate Fellowship worth over $9,000 to pay my tuition. Dr. Harris and Professor Packwood were instrumental in getting a business school started at Seattle Pacific. At the time I graduated with a BA degree in Accounting/Political Science, we were part of the School of Social and Behavioral Sciences.”

“Alexander to me was the chapel, a place I could go for quiet, study, prayer, or just to contemplate the stained glass windows. And it housed Dr. Spina’s office; he was my student mentor though we were/are probably the same age. I learned so much from him, though I kept expecting lightning to strike after some of the things he said. It never did, and I’m stronger for it.”

“I lived on the second floor Alexander Hall my junior and senior years when Lydia and Don McNichols were house parents. Our room was the “tower room” at the top of the stairs ... what fun was had in that room. Many years later, I ran in to Don and mentioned I had heard my old room had been turned into a chapel. He quickly responded with, "They had to bring sanctity to the room somehow!”

“I lived on 4th floor in Alexander Hall. It had formally been a men’s dorm where my brother was a resident. Enjoyed getting acquainted with new people.”

View From the Roof

“As a nursing major in ’64, I lived on the top floor of Alexander Hall. A friend was tossing a tennis ball up to our window for me to catch and it accidentally landed on the roof. I said sure, I could get it for him, and climbed the back turret onto the roof, knowing that I would NOT fall, but if I did I could surely grab the ivy and hang on. I did get the ball and tossed it down to him, but I was never even remotely tempted to climb up on that roof again!”

“Because I was a Christian Education major at SPU, I spent many life-changing hours visiting my professors (notably Ed Smyth, Rob Wall, and Bob Drovdahl) in Alexander Hall. The serene, cozy prayer chapel became my escape when I needed quiet; I estimate I spent three to four hours there weekly, praying, studying, listening for God’s still, small voice. When I think of SPU, my mind goes back to those precious times, and I am so thankful that the legacy of Alexander Hall lives on!”

A Place to Pray

“I have wonderful memories of spending many hours in prayer actually, in the chapel on second floor (I believe). Don't know if the chapel is still there. But it was a refuge for me many times during my student days at SPU.”

Room on the Right

“On the fourth floor, the room right next to the bathroom, was my first college room, with a good view of the new men’s dorm — because we were on the right side of the hall. We called it “Alexandria.” A sink in the room made it easier to brush our teeth and wash our face. ☺

My Home for Four Years

“I lived on the fourth floor of Alexander Hall for four years, from 1945 to 1949. My wife, Martha, and I now live in a home for missionary retirees after serving in Brazil for 46 years. ”

“I was among the last group of young women allowed to call Alexander Hall home, and proudly added my voice and prayers as we sang ‘This Old House.’”

“My mom, Dorothy Wilson, worked in Alexander Hall for 20 years as the administrative assistant in the School of Social and Behavioral Sciences (1974–94).”

A Beautiful Building, and We Love It

“I attended SPC from 1953 to 1957 but never lived in or attended classes in Alexander Hall. However, my husband, G. Paul Jackson ’56, lived there. It is a beautiful building, and we love it. We want to do our small part to preserve it .”

“I am 89 years old. My first experience with a real earthquake was in Alexander Hall.”

“In the spring of 1965 I visited the campus one weekend as a high school senior. I slept on the floor in a room in Alexander that was shared by two or three female students. Our nursing class had our pinning ceremony in Alexander chapel.  Our dear instructors paid for our beautiful gold nursing pins with our names engraved on the backs. ”

“I lived in Alexander Hall my junior and senior years, on the third floor. We were a very cohesive group; the dorm mother occasionally cooked breakfast for everyone in the dorm. My senior year, three of my good friends, who were all named Judy, were proctors on three separate floors, in single rooms (Judy Poet [Hoefer ’65], Judy Cornwell [Allen ’65], Judy Faulkner). I still keep in contact with two of the Judys. Wish I knew what happened to Judy Faulkner, who was also my roommate my junior year. The 1965 earthquake left a crack in the stair wall. I think I was running up the stairs when it happened, and felt the building shake.”

Room With a View

“My room was on the third floor in the far corner toward McKinley auditorium. The room contained a bunk bed, a couple of small desks, and a hot plate — used a lot, and probably illegally. At that time, the Music Building was between Alexander and McKinley, and when Betty Jo and I began dating, we would signal with one another that it was time for a coffee break and meet at the place across the street.”

“The SPU faculty encouraged and taught me to think; they were models for me of Christians with sharp minds and generous hearts. It was Frank Spina who told me that the church needed good women theologians and that I should go to Yale Divinity School to study Old Testament. Eventually I was called to ordained ministry, but it was a call I never would have heard had it not been for the hours spent in Alexander Hall and the encouragement I received from faculty members who also became my friends.”

My Favorite Place on Campus

“When I was in my junior year, I would go to the beautiful, tiny chapel to pray and to rest. I was volunteering with Young Life for 20 hours a week, working part time and taking 15 units and longed to be in a place where I could be quiet, think and pray. On more than one occasion I would ‘rest in the Lord’ and wake up several minutes later feeling refreshed and ready to go! To this day, it's my favorite place on campus.”

“Alexander Hall may, indeed, be the oldest building in all of Queen Anne. It certainly is among the oldest surviving masonry load-bearing buildings in town. … We are delighted its preservation is assured and trust the university’s other historic buildings will receive similar care.”

“If only the bricks of Alexander Hall could talk! They would say that there has been a wonderful melding of faculty and students in the building: from Political Science and Geography to Theology, Sociology, and History. I think those walls must have soaked up some exciting conversations about what Christians can do in the world to be agents of change and God’s grace. To me, Alexander has been the very heart of SPU and when I look at it, I don’t see just a building: I see a launching pad.”

“Rob Wall’s office was stacked with papers, books, projects, and who knows what else. (It probably still is!) The first time I sat there, some early morning while taking “New Testament,” I felt overwhelmed but strangely comforted. And so began a long relationship that transformed myriad dimensions of my life.”

More Than a Dorm Mom

“I came to SPC as a freshman in 1961, and Alexander Hall was a Freshman Girls' Dorm at that time. My room was on the 4th floor at the top of the stairs with a most magnificent view of Seattle through the six windows. It was a very welcoming room. But what made that year most precious to me was Marie Hollowell, dorm mom, who literally became mom to me that year as my mom had just passed away before I came to college. It will always remain a very special place to me.” 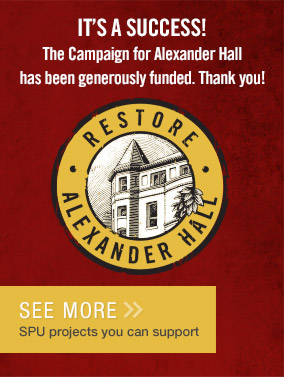